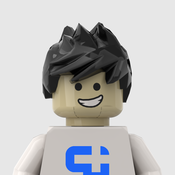 By CodeHard
15 comments
The kraken is a legendary sea monster of gigantic size in Scandinavian folklore. According to the Norse sagas, the kraken dwells off the coasts of Norway and Greenland and terrorizes nearby sailors.
- Wikipedia
This is a display of a kraken destroying a ship with its mighty force. In a few seconds, the ship will sink to the bottom of the sea. But for now, it's still trying to stay afloat.
I like little displays. I also like big monsters. That's why I built this. It would make a great set, because I think other people like those things too.