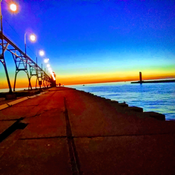 By Obligater
20 comments
a family friendly game based on the trials and tribulations of baby fish in the wild ocean.
~RULES~
GOAL:
visit each of the eight sites in the ocean without getting scared and running away.
SETUP:
after game pieces have been chosen for each player, players start on red tiles in the empty corner.
MOVEMENT:
players - move like Chinese Checkers rules. you can move one space, or jump a friend.
predators - on the Predators turn, roll the die:
-if it comes up red add a predator to one of the red squares.
-if an arrow comes up move all predators in the direction of the arrow as far as they can go.(if your confused look up how scatter die works)
*if the Predators movement comes across any player pieces, the player pieces run to the closest edge of the board away from the predator. no two players can be at the same red edge tile.
-if the purple circle comes up, the super Predator scares the closest predator
EXTRA:
fashionable mermaid - if a player gets to the mermaid, the mermaid scares all the Predators off the board.
dolphin - on rolling the purple circle, the dolphin can carry any player who was at the edge of the board to where the group is
Mama seahorse - on rolling the purple circle, the giant seahorse can follow a player and chase away the first Predator that comes across the player
garbage bags - at the beginning of the game randomly drop some the garbage bag pieces. the surrounding eight squares of where the garbage bags land are unable to be moved through by players
OTHER:
if there is any controversy about what should be done, the oldest person decides what the most inclusive and fun thing to do is and becomes the rule for the moment(you did not make it this far with poor judgment, you know what the best thing to do would be), you may elicit suggestions, make up a story or what ever you think is best(even if it involves the crab and one of those castle swords you have close by)
IDEAS?
if you can think of any other special rules that may be fun please comment below! there is an angler fish that needs a role.
remember to recycle as much clean glass, metal and paper as possible. reduce single use plastics, help out where you can and conserve water.