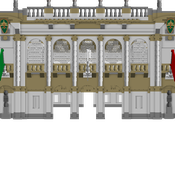 Chandra is a satellite that orbits earth since 1999 (the year I was born), and is specialized in capturing X-Ray that naturally travel troughout the universe, emitted from extremely hot objects, such as dying stars.

My dad used to work as a researcher at the Smithsonian's Astrophysical Observatory in Cambridge, MA, where the Chandra X-Ray observatory is operated, and I would often peek at some photos he was studying. Needless to say, they where amazing!

But since I cant recreate the images taken from Chandra, (and satellites are awesome) I wanted to honor the masterpiece of engineering and technology which is the observatory itself.

The LEGO model is made out of 93 bricks (base excluded, as it is just optional), and it can easily sit on your desk since it is not very large. Really easy to build (There is just one 180 degree inversion), and in my opinion very fun. It is also lightweight, so I would not be surprised if someone hanged it to a string.

Thanks for checking it out!