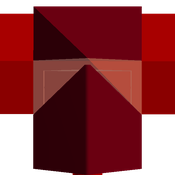 A game of honor returns for another shot at the ultimate goal: Supremacy!
Two kingdoms stand against each other once again, longing to reign supreme, only one can win this game of shogi. This game may be similar to the more recognizable Chess, but unlike chess, when pieces like a Foot-soldier, Fortress, Overseer, Spearman, Warrior, or Silver Guard breach enemy lines, they grow stronger and promote themselves (via simple turns and raising). Not only that but defeating an enemy piece will add it to your ranks! (By switching the color from blue to red and vice versa).
The Game Pieces
Why did you build this again?
I actually learned of the game via clubhouse games. Its simplicity inspired me to develop a more detailed version of it with the same tricks and trappings from the original board game. As for why I did it again, I learned from my past mistake of relying on LDD models and MS Paint to convey an idea.
Why do you still believe in this? It didn't work out for you before!
I was waiting for the right time to try again with a higher degree of quality. That's all. Still, this can really make the admittedly bland look of shogi look eye-popping to people in the west, where chess dominates the strategic board game aspect.