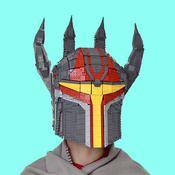 By FirstOrderLuka
99 comments
I still remember the first time watching Studio Ghibli's masterpiece Howl's Moving Castle and being so drawn in when, at the beginning of the film, I saw the castle walking through the morning mist, across beautiful green hills, surrounded by tiny houses and shepherds leading their sheep. The charming, dreamy, piano music really made the scene perfect.
MY GOAL:
That's what I want to achieve with my idea. I want people to see the detailed model of Howl's Moving Castle on their shelves and be reminded of the music, the positive story, the clever characters, the imagination and creativity of the world of Hayao Miyazaki. And I believe the castle is a perfect summary of the movies as a whole.
﻿
THE BUILD:
I wanted to build a very, very detailed castle, which meant I couldn't go too big, neither did I want to. There is something very charming with having a miniature of a realistically huge model on your shelf.
One thing I wanted to capture is the feeling of it being very randomly built, made of out of scrap pieces and not the most stable structure. I also wanted to highlight the contrast of the huge bulky castle with the four small thin legs that hold it up and walk it around.
FINAL THOUGHTS:
I don't want to write too much, I'd rather give you time to enjoy all the details of the build. Minifigures would be cool, however I thought they weren't super necessary for now (might be an addition later on).
I hope you enjoyed looking at the pictures of my build and reading the description as much as I did building this idea. I'd really appreciate if you could support the project with your vote and by sharing it with your friends and fellow LEGO builders! Follow me on here for updates on this project and my other builds. Thank you and keep bricking!