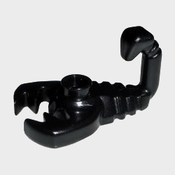 Hi, this is my second Hogwarts castle project. I've always believed that designers and architects did a great job creating this castle in Harry Potter movies, it's amazing piece of architecture. So I tried to build it from Legos since I was fourteen. My first attempt was Model of Hogwarts Castle submitted few years ago. Shortly after submitting I realised that it's too big and I have to make it smaller. So I started working on Micro version. I've done many updates since my first draft and this is the final version.

I made all the effort to keep as much details as possible. It's an architecture set so it retains proportions but there are some changes anyway. The Quditch stadium and the Hagrid's hut aren't on the right places but it's neccessery if I wanted them included.

It took me about 50 hours to build the final version, it consists of 1850 bricks and all the bricks used are official Lego bricks. Size of the model is 25 x 38 x 15 cm and uses many interesting SNOT techniques. Model was designed according to look from movies 4 - 6.

I'm not sure if Lego owns a HP brand anymore but here is my idea. There is a new movie from Harry Potter's world coming soon and I'm sure that Hogwarts castle will get some role. This model could be released along with the movie.