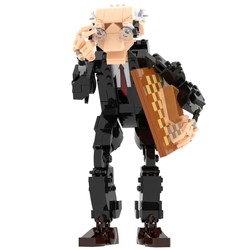 Everybody Loves Raymond is a sitcom which is based on true life events with plenty of humour and iconic characters. The screenplay of the sitcom is very original and the audience can feel and relate to a lot of the plot lines in the TV series. Likewise most sitcoms, Everybody Loves Raymond has its emotional impact on its viewers and I feel very sentimental and nostalgic about the 25th anniversary of the series. The year 2021 is highly anticipated and very special for the die-hard fans including myself. A year promising to be full of positive feelings and warm memories of those good old days when life was more entertaining with this unique and enjoyable sitcom.

Characters: The Barones – Ray, Debra, Robert, Amy Macdougall, Frank, Marie, Michael, Geoffrey, Ally and Shamsky.
Piece count: 1705
Minifigures: 9
Easter eggs: Ray's golf stick from “Golf”, “The Toaster”, sportswriter of the year trophy from “Recovering Pessimist”, a camera from “The Model”, a chocolate cake and a radio from “The Kicker", Debra's Thanksgiving turkey from “Turkey or Fish”, “The Children’s Book”, “The Letter”, the wedding video from “The Tenth Anniversary”, Marie‘s piano from “Mozart”, wooden spoon, “The Sculpture”, Shamsky from “The Dog”, “Robert's Rodeo”, Ally's Hackidu cards, detail from “Frank Paints the House” and “The Christmas picture”.
Having watched Everybody Loves Raymond numerous times with great pleasure, I’ve made the decision to submit my LEGO IDEAS project dedicated to the classic sitcom.
Specificity and detailedness have been my main motivation. Every single brick has been put into a specific position in order to represent the house and the characters’ unique personalities with utmost accuracy.
I have been inspired for my project by Central Perk from F.R.I.E.N.D.S set (2019), designed by Milan Madge and Crystal Fontan.
I got the set for Christmas and I was extremely happy because my country Bulgaria is not familiar with neither LEGO IDEAS, nor LEGO shops. As soon as F.R.I.E.N.D.S LEGO set was released in Bulgaria, at only one single place, I was lucky enough to get one of the few available sets! Having said that, I would be glad to popularise LEGO IDEAS in my own country.
I hope that the Everybody Loves Raymond set would touch a wider range of audience – not only the fans of the series itself, but also any sort of people as well, including children who could be attracted by the fact that the figurines represent a whole family and every character has its own personality.
As a LEGO collector I am willing to be part of the LEGO community even as a fan designer. LEGO is my hobby and I find that it can appeal to many collectors, because there are products from DUPLO (for the youngest) to 18+ (for grown-ups). Everybody Loves Raymond offers something to everyone.
Everybody loves LEGO.
18
379
days left