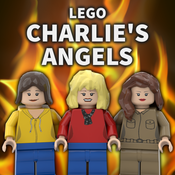 By DaSithLord
40 comments
Once upon a time, there were three "Lego" girls who went to the police academy...
Step inside Townsend Agency from the hit 1970s television series, Charlie's Angels! This Lego Ideas project specifically depicts it as seen in season 1, complete with the Angels' 3 iconic Ford cars parked outside. Also included are 4 minifigures, one for each Angel (Sabrina, Jill & Kelly) and the trusty Bosley.
The Townsend Agency building can be either displayed as a brick facade or folded in to form the office interior. There are numerous little details, such as the speakerphone from which the unseen Charlie's voice emanates. Additionally, the office space is scattered with objects pertaining to many season 1 episodes. Can you identify what these are?
Aside from being a Charlie's Angels fan, I designed this set because I believe it appeals to all ages. It would not only make a wonderful playset for both girls and boys, but also a great display piece for nostalgic collectors.
Your help can make this an actual Lego set! Please click the blue "SUPPORT" button on the top right of this page. If we reach 10,000 votes, this dream could become a reality!