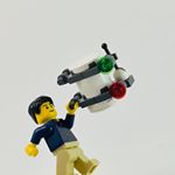 By Brickmill
35 comments
Avatar: The Last Airbender in my opinion is one of the greatest animated and TV shows to ever exist with its complex and multi-dimensional characters, gripping heroic story, and diverse and immersive world-building. One of the most mysterious and elusive characters was The Blue Spirit (aka Prince Zuko) who first appeared in Book 1: Water Episode 13: The Blue Spirit.
As the Blue Spirit, Prince Zuko showed a new side to his complex history by donning this infamous blue mask and actually saving Avatar Aang when he was captured even though his life mission (at the time) was finding and capturing the Avatar. This mask holds a special with Zuko as it was actually one of the masks that his mother Ursa kept hidden away and it was also used in the in-universe play "Love Amongst the Dragons". Soon after it's airing, this mask become iconic in the world of Avatar and has had a handful of cameos in wanted posters scattered throughout the Fire Nation and Earth Kingdom.
If you like this idea, please consider voting so it can become a real LEGO set! The world needs more LEGO ATLA!