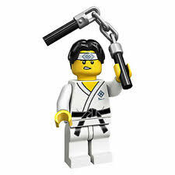 By Katarapko Slim
23 comments
Thirty years after the mysterious disappearance of the Blacktron, a lone starship screams out of the darkness to attack a trading outpost. In the days that follow, more and more black and blue fighters emerge, sweeping through the sector. With no currently active space defence force to stop them, all hope seems lost, until by chance a single fighter crash lands. Its pilot taken for interrogation, City scientists set to work in analysing his craft...
For this build I have attempted to recreate the feel of the space themes I grew up with, such as Blacktron, M-Tron and Ice Planet 2002. This meant a blocky, largely uncomplicated fighter with a few simple play features. For the most part, I have limited myself to the parts that were available in the early 1990s, but have allowed a few more recent pieces in the detailing.
The Blutron Warpike is conceptualised as a light strike fighter with heavy armaments designed for in-and-out raiding. Features include (picture number in brackets):
The recent survey undertaken on this website showed strong support for classic space. This got me thinking about the theme again, which led to this build.
Pieces: 358
Minifigures: 1