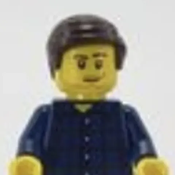 By Nino Bricks
112 comments
Good memories!
Which is?
In the scenario (habitat) a father builds a LEGO set with his young son that reminds him of the same wonderful feeling when he was a child and also played with LEGO.
Why did you build?
Because I really like to create MOCs of different themes. Several AFOL friends comment on the memories with LEGO of when they were children today passing the legacy on to their children, so I thought it would be a very cool idea to assemble this habitat and honor them.
Why do you believe this would make a great LEGO set?
Because this scene represents the reality of many people and touches the heart of LEGO lovers. The theme addresses at the same time family, nostalgia and brings back good memories.
It has a small size, with simple bricks, great for display.
It has minifigures, which if the person wants to include or replace them with their own that represent themselves.
I am absolutely sure that it will become a very popular set and that many people will want to have it at home.
Thank you in advance for the opportunity and I leave it here that I am very happy to share here a personal idea with chances of becoming a LEGO set!