By Xendor
0 comments
Teridax was originally a member of the Makuta, a people originally meant to protect the Matoran and Rahi within Mata Nui. But they betrayed Mata Nui, and began a mission of conquest. During the war, Teridax became the leader of the Makuta. Hundreds of years later, Teridax took over Mata Nui's body, and placed Mata Nui's spirit in the Ignika, the Mask of Life. Years later, Mata Nui gained control of another giant body, and defeated Teridax in an all out battle, destroying Teridax's last form. Since then, Teridax has been hiding in the Rahkshi Prison, waiting for one to come who could restore him to power. 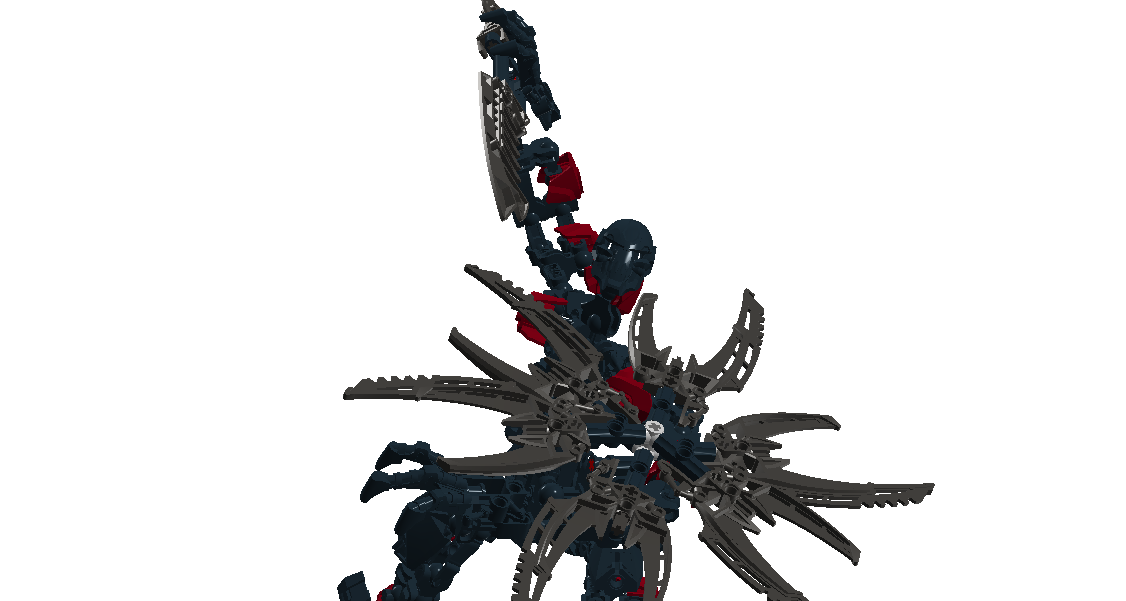 Now, Teridax has allied himself with the Unknown. After much searching, they found a cavern with armor, and a mysterious mask (details will be in chapter 7). She had the Vahki rebuild the machine, and Teridax infested it. 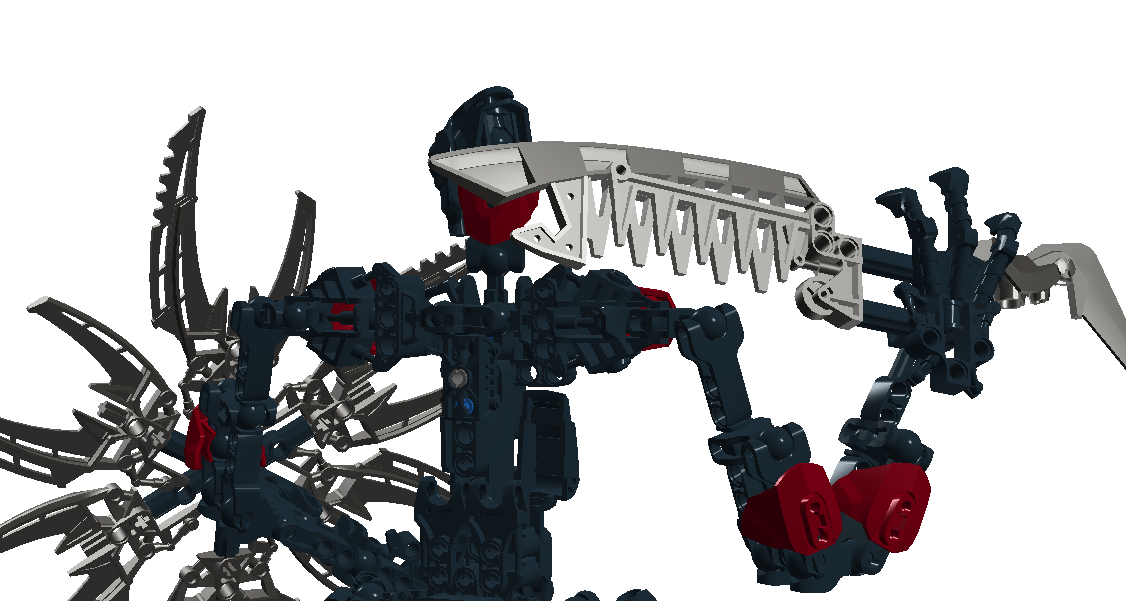 Now, Teridax is creating Kraata, and preparing an army of Rahkshi. Soon, Makuta, Orbalan, Dark Hunter, Vahki, Rahkshi, and Skrall will all begin their conquest for revenge. 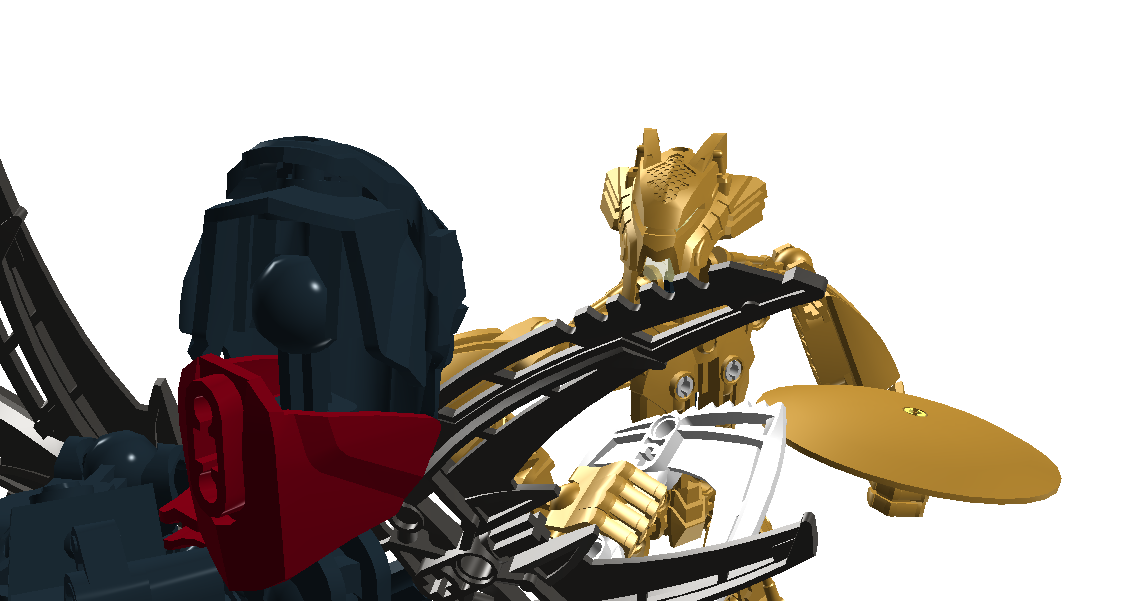 Teridax now bears the Mask of Death, a weapon created by an insane Great Being while in prison before he was sent away. Now, only the Mask of Life can save them. But how?

Missed last chapter? Then go to the Bionicle: The Return - Branar.

Chapter 8: The Mask is Gone

Branar (Skrall Leader): What do you want with us, Dark Hunter?

Tyrant: Oh, please, don’t relate me with those traitors.

The Skrall has guided Tyrant and his army of Vahki to the camp of the Shadow Skrall, a team of Skrall that rebelled against Stronius when he sought strength in an alliance with the Glatorian and Toa. Surrounded by thousands of Skrall, Tyrant knew that even with his great strength, and the Vahkis’ support, if the Skrall were to attack it would mean the end of more than 75% of his team.

Branar: The Shadowed One didn’t send you?

Tyrant: I don’t even serve that fool. He betrayed me many years ago.

Branar: I see. So who did send you, then?

Tyrant: Have you heard the rumors of a new enemy?

Immediately, all the Skrall in the area began cheering and roaring.

Branar: Indeed. They call it the Unknown.

Tyrant: She is my master… well, one of them. The other is Teridax, the Makuta of Shadow.

Branar: I thought he was killed by Mata Nui.

Tyrant: Not exactly. His body was killed, but his spirit survived.

Branar: And what does Teridax want with us?

Tyrant: *chuckle* You can’t guess? We want your services.

Bomonga was going to take his routinely walks around the Temple. He had his staff, his scrolls, and his sanity, so he felt like it was a good day.

That wasn’t to last.

As he walked up to the Temple, he noticed impressions in the stone stair way. As he moved up, he began seeing scraps of iron and marble spread out across the steps. He looked up.

And saw that the door to the Temple had been ripped open. He dropped his scrolls, and used his powers to push him up the stairs, to the entrance.

As he walked in, he noticed that there was a straight line of footprints coming from the Mask of Life.

Or, where the Mask of Life was.

Bomonga hurried to the alarm bell, which unfortunately is around back, where there are no exits. Soon, Toa and Glatorian all over came running in.

Bomonga: The Ignika is gone. These tracks must belong to the culprit.

Gali: Must be one heavy thief.

Ackar: Gali? What is it?

Gali: These markings are the similar to the waves of energy I saw coming from Ignika when he sacrificed himself to revive Mata Nui.

Ackar: So you think the Mask of Life had something to do with this.

Gali: Got any other explanation?

Gresh: Thief walks in and out backwards.

Hewkii: There would be signs of a second indentation in the steps. From what I can tell, whoever it is only passed here once.

Vakama: The Mask of Life is our top priority. From the tracks, it seems as if this mystery figure is heading towards the Unknown. What this person plans on doing is unknown.

Vakama then turned towards Gali.

Vakama: Gali, you got closest with Ignika. If you go, he may respond to you. I am putting you in charge of the rescue operation.

Unknown: Sir, are you alright?

Teridax: *gasp* That… was… close. I didn’t realize how powerful this mask would be.

Unknown: How does it feel?

Teridax: The Great Being must’ve given this mask a conscience. I could feel it intruding my mind when I put it on. Equal to the Mask of Life is right.

Teridax (phantom voice): Sssorrry. Got a bit excccited when you touched me.

Teridax: Can’t you use psychic abilities?

Teridax: Without using my mouth. You know, telepathical communication.

They ended up waiting ten minutes. Meanwhile, they checked up on the Vahki’s progress, and sent some of the recently revived Vahki out on patrol.

Akingi (telepathically): Alright, there we go. Don’t bother lying, though. I’m in your minds, so I know what you’re thinking. Wow, you’ve got some army here.

All of the Vahki stopped and stared at him for a second, then continued on.

Akingi: Maybe we should communicate through our thoughts.

Akingi: Well, someone’s getting a hang of it. Oh, and I’m relaying your thoughts to each other, so you can hear each other’s thoughts.

Teridax: Sharing my thoughts with big ol’ fire and muscle here? Okay, but I don’t want her to know…

Akingi: Maybe we should just go somewhere else. You know, away from the Vahki so they don’t think you guys are insane.

Again the Vahki stopped. But then they continued without looking back.

Akingi: Master, she was saying master. Now let’s go. This is going to be harder than I thought.

Gali: Hewkii, any change in our suspect’s pace?

Hewkii: Negative. Whoever this is, this person’s got more stamina than we do.

Tarix: Think we should spend the night. It is about dinner time.

Malum: Normally I’d wait for a “please,” but this is an important occasion.

Malum: Hey, after hundreds of years being an outcast, till you find out you’ve been considered a hero for half that time, you try staying gloomy.

Kiina: No, thank you.

Malum: Suit yourself. I will say, exile was good medicine.

Gali: So is laughter.

Gelu: Got anything for me?

Malum: Oh, sure. HEY, EVERYBODY! WE’RE HAVING BURNED RAHI AND ASH FOR DINNER!

A few miles away, a figure can be seen running to the west. His armor gave off a slight, golden light that radiated like a star in the night sky. He could feel the dangerous force. He stopped, and knelt on the ground, listening to the thoughts of this mysterious being. It was jumbled. There seemed to be three beings, but only one of them is the real one.

Suddenly, two of the beings disappeared, and a single thought came right at him.

Thought: Hello, Ignika. I’ve been waiting for you.

He can’t do this alone.

Next up... Toa Ignika returns.