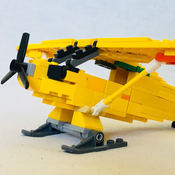 This LEGO model is based on the popular J-3 Cub, built by Piper Aircraft. With over 20,000 models built, it is the ninth most produced aircraft in the world. With its two-seat cockpit, this is a great aircraft to train in. Pilot still would take any opportunity to fly in this legendary aircraft. With a top speed of 87 mph, it is a great slow, light fligher. The Cub is known for its ability to takeoff and land in very short distances, and its unmatched ability to takeoff and land anywhere. This aircraft puts the bush in bushplane.

My LEGO model has a length of 24 studs, and a wingspan of 32 studs. This makes it as close to minifigure scale as possible. The cockpit fits two minifigures, one in front and one behind. I started with the cockpit, moved back to the tail, and added wings, struts, and landing gear.

My LEGO model also breaks apart easily, into the wings and fuselage, making it portible on a LEGO trailer or in a semi-truck.