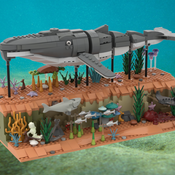 Dinosaurs! What more do I have to say?
I think everyone who has ever played with LEGO has tried building a dinosaur or a dinosaur skeleton, but very often they turn out bulky, unnatural or just way too big. With these 8 (9) skeltons I tried to build fossils that are not only natural looking but also in a reasonable size to be used for custom (or official *wink wink*) LEGO City Museums or just as decoration.

Unfortunately a lot of the parts i needed to use were not (yet) available in the color I needed them in so I had to build these fossils in LDD, but they still turned out great.

So far the idea includes the follwoing 8(9) fossils:

Each Skeleton comes with it's own stand and a sign for stickers with information on them. Since Allosaurus and Spinosaurus are two legged and fairly large they needed a second support on which they just rest. For all the four legged dinosaurs the feet act as additional stands. Since flextubes are used as spinal cords and the feet posses several joints it is also easy to change the dinosaurs poses and positions.