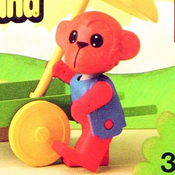 What time is it? It's thanks time!

This project has been really successful and it looks like it will hit the 10000 votes mark pretty soon. I wanted to thank all of you for your support and all the great feedback. Special thanks go to the official Facebook Adventure Time page for linking to this project twice, generating more than 80000 likes, 8000 shares and quite a lot of supporters in the process!

Before this project gets locked when it goes into review, I wanted to make one last update that reflects your suggestions to use prints/stickers for face detail. I've also fixed the colors of previous renders and optimized the bricks count a bit to make all 16 characters use only 772 bricks. 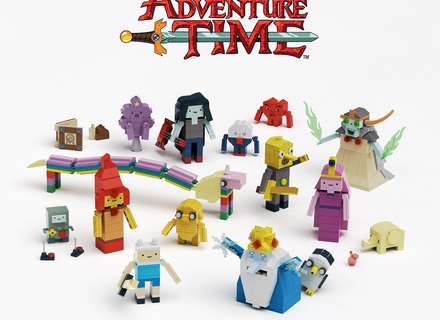 Thanks again, now with 300 votes left let's push this up to 10000! Hopefully Lego and Cartoon Network will come to an agreement to make this a real set. Wouldn't that be mathematical?

What time is it? It's update time!

Thanks a lot for all your recent support! It's been thrilling to see this project getting so much attention in the last couple of days.

Finally it's time for the first update: 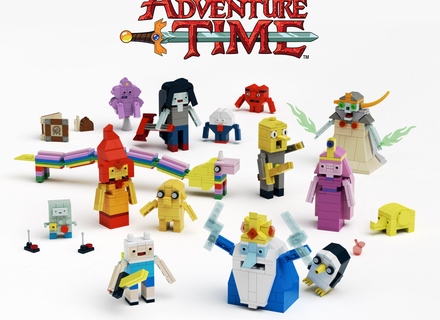 This time I have tried to respect the proportions of the original characters more than in my first attempt. I've played around with adding brick built face detail rather than relying on prints/stickers. Overall 859 bricks were used to create these 16 characters and their accessories. I'd love to hear what you think about this new approach so please use the comments section for criticism and requests.

I'd like to do a round-up of the most frequent questions I've been asked:

- Why is Peppermint Butler not included?

He is now! He's a bit blocky but he's there.

- Can you make Fiona and Cake?

I may give a go at the gender-bender characters one day but for this project I will stick to canon.

- Why aren't these minifigs?

I have seen custom AT minifigs made by fans online but to me they never feel like the AT characters i know. On the other end, there are elaborate builds that look awesome but have little playability. This project seeks to present an intermediary alternative: poseable brick built figures that are simple enough that the counts part is low but detailed enough that the characters are easily recognizable.

- Why don't you make the tree fort, the Ice King's castle, PB's castle?

I believe it's possible to create environments that fit the scale I've chosen. These would need to be slightly bigger than the ones used for the Friends or Elves product lines. However i think AT is about characters interactions before anything else and that's why i chose to focus on the characters.

- Why do you even bother? The previous AT project that collected 10 000 votes got canceled during the review phase.

What time is it? It's blogging time!

I've noticed this project getting quite a lot of buzz on blogs recently (it's even been featured on CNET's Tech Culture blog) so i wanted to thank all of you who have been spreading the word and supporting this project. Here's another sneak peak at what I've been working on: 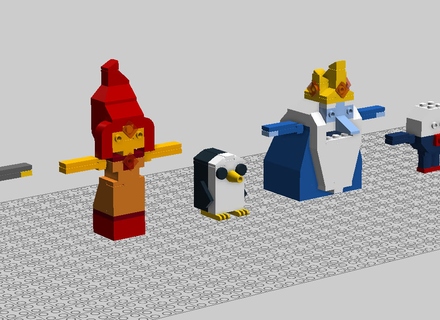 I've included the requested fan favorite Peppermint Butler! Unfortunately not all of his features translate well into this scale but i think he is still recognizable. Overall what do you think of the new versions of the characters?

What time is it? It's Staff Pick time!

Wow, i am thrilled this project has been chosen as a staff pick! Thanks a lot to the Lego team and to all the voters who have been supporting the project.

I am planning to release a proper update to the project in a few weeks but to thank you all for the recent wave of support, i will give you a sneak peek now. I've recently fooled around in LDD to find a better translation of the Adventure Time character designs into Lego form. Getting more accurate features comes at the price of extra pieces but overall i think this updated style gets more of the characters charm across. Here 169 bricks are used for the new characters versions while the old versions used 124 bricks. 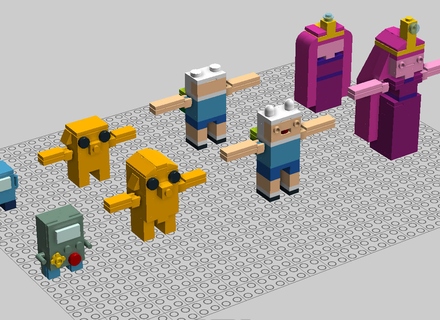 Before i propagate the style changes to the rest of the cast, please tell me what you think of these new characters!

Thanks again, and stay tuned!