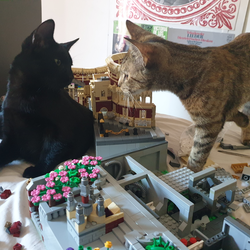 A Purple Dinosaur
67
246
days left
The Royal Albert Hall is situated in South West London and is one of the most internationally recognised buildings. Designed to promote the arts and sciences it has since 1871 maintained its hectic schedule of rock gigs, classical music concerts, community and school concerts, comedy, circus, lectures, film premieres and sports, including tennis and even boxing. It is the Rolls Royce of village halls!
As a set it would sit alongside the Lego Sydney Opera House and Lego Taj Mahal in depicting some of the most sensational buildings in the world. Similar in size and weight to Lego's Assembly Square, this model is all about playability rather than just being a pretty model for the shelf. The base hinges to split the hall and reveal the auditorium with organ and a grand piano. The detailed roof (including the ceiling 'mushrooms' to improve the acoustic) can be lifted as can the auditorium. Each half of the hall can be lifted out to access a basic representation of the loading bay, car park, backstage and arena bars.
Further details include the south steps with John Durham's statue of Prince Albert presiding over representations of the four continents and the tree outside stage door planted in tribute to Mario Lanza.
Part dolls house, part Russian doll this takes modular buildings a step further with each section (base, both halves of the exterior, auditorium and roof) slotting inside the other.
I had been stockpiling dark red and tan Lego for some time even though I was too busy to contemplate building the Hall. Then with Covid 19 and the lock down I suddenly had no excuse. The Royal Albert Hall is very close to my heart: I work there and to see it shut and empty is beyond heart breaking.
I am submitting this just as the 2020 Proms starts and this is a model to celebrate not just a venue but live music the world over. Wherever you are please look after your arts venues. They will be the last parts of the economy to be reopened and need our help. Please do go to the Royal Albert Hall's website if you want to donate but in the meantime I hope you like the model and support it. Please tell your friends. I am barely on social media so I might need a piggy back to get this seen. Many thanks.
67
246
days left