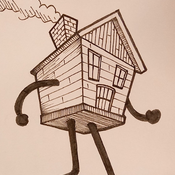 This projet idea is a series of three differently themed micro-scale builds. The three worlds progress through time, beginning with a castle from the medieval ages, to a modern city, and finally a futuristic Mars base. I wanted each model to have its own unique color scheme, separating each one from the others. The castle sits atop a rock formation with a twisting staircase leading to the castle from the sea below. At the bottom of the staircase is a set of docks with a micro-scale pirate ship in port. The modern city includes four unique skyscrapers as well as a fish statue on the ground level. The mars base includes a rocketship and a modular-style Mars base. I chose the color scheme for the Mars diorama because it reminded me of the Mars Mission series, one of my favorites as a kid.

Each model sits on a base, each assembled the same way. The bases are 8 studs in diameter. Some of the windows on the castle as well as the blue skyscraper were made using the sides of 1x2 grooved plates. The windows on the tan/brown building are made with The Piece of Resistance from the LEGO Movie series. The rocket sits on a revolving plate allowing the rocket to be displayed in any direction. The rocket can also be removed.

This was a very fun project to design. I found it interesting to find pieces that gave the micro-scale look I was looking for. If this project receives positive I might consider making more varations of micro builds. I greatly appreciate any support given. Thank you. :)