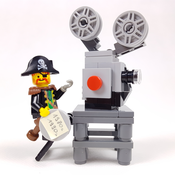 In the days of old

Like many of us adult fans of LEGO, I really miss the good old days when the LEGO knights proudly ruled over the land (or just the carpet) guarding their mighty castles, fighting tournaments and setting out on an endless number of adventures.

But fond childhood memories and sheer sentiment are not the only reasons for me to miss the old Castle series. It is also the fact that these old sets included many features that made them really fun to play with, provided good flexibility and extensibility and also (like most of the LEGO sets back then) sparked our imagination by including pictures on the boxes and in the instructions booklets showing alternative things that you could build with the parts from your main set. With all this you had a feeling that you can rebuild and reconfigure your castles, make them bigger or smaller, or of a different shape, and just create something new to play with every day.

With this Modular Knight’s Castle project I attempt to bring the spirit of the old Castle series back to life by creating a set that is easily reconfigurable and can provide many play possibilities.

While designing it, I was doing my best to follow these four simple requirements:

The castle can be built using these six basic types of modules:

All the walls, tower bases and the gate can be connected together using a simple yet sturdy two-pin system. And as for the tower and battlement modules, each pair is held together with only four studs to provide a way to connect and disconnect them easily.

I’ve chosen two of the most classic LEGO Castle factions of knights (at least for me) to be included in this set – the Crusaders and the Black Falcons. Each of these factions is represented by three soldiers, two archers and a mounted knight to lead them.

The main castle gate and the towers can be adorned with emblems (shields) and flags used by either of the factions in order to define the current castle owner. If the castle is captured by the opposing faction, the flags and shields can easily be replaced. The set includes all the spare parts to accomplish this: each faction is given 4 additional shields and 8 flags (red for Crusaders and blue for Black Falcons).

The number of modules included in the set is actually enough to build two small castles or outposts – one for each of the factions. Of course only one of them will have a proper gate.

In addition to all the modules, the set also contains all the parts to build a single siege tower that can be used by the soldiers who attack the castle. It is fitted with a folding bridge that reaches the top of the castle walls and has enough space inside for the soldiers to hide from the enemy archers.

Join me on my quest to breathe new life into the good old LEGO Castle and bring all the fun back!

Your support is greatly appreciated!