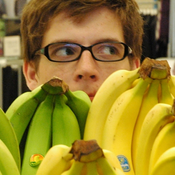 The Voyager Missions are landmarks in the history of space exploration and the expansion of human scientific knowledge.

The Voyager Program was launched on September 5, 1977. The 2 Voyager probes have since provided scientists with invaluable information about Jupiter, Saturn, and the other outer planets. On August 25, 2012 Voyager 1 left the Solar System and entered interstellar space, becoming the first man-made object to do so.

Each Voyager spacecraft carries a golden record encoded with various audio and visual information about the human race should an extraterrestrial species come across it in the future.

The model features various instruments from the spacecraft, along with the golden record, a transparent stand, and two NASA scientist minifigs.

At only 52 bricks, this would be an extremely affordable set.