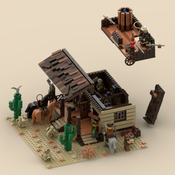 The Pont du Gard is an ancient Roman aqueduct that crosses the Gardon River near the town of Vers-Pont-du-Gard in southern France. The Pont du Gard, built as three tiers of archways to bring water to the city of Nîmes, is the highest of all elevated Roman aqueducts, and one of the best preserved. It was added to UNESCO's list of World Heritage Sites in 1985 because of its historical importance.

The bridge has three tiers of arches, stands 48.8 m (160 ft) high, and descends a mere 2.5 centimetres (1 in) – a gradient of only 1 in 18,241 – while the whole aqueduct descends in height by only 12.6 m (41 ft) over its entire length, which is indicative of the great precision that Roman engineers were able to achieve using simple technology. The Nîmes aqueduct was built to channel water from the springs of the Fontaine d'Eure near Uzès to the castellum divisorum (repartition basin) in Nimes

As a fan of the LEGO Architecture series, I was surprised there were no official sets of this monument one of the most important sturcture of the ancient Roman Empire a collossal engineer structure.

I have visit this monument when I was child and I was entranced by his immensity.

I hope you enjoyed my model of this Roman Structure and I thank you for your support! Every vote counts :)

Support me and brick on!!!