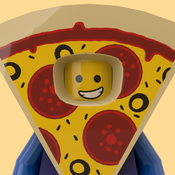 By PearlMushroom
27 comments
Take your next home vacation by storm, with these LEGO Pool Inflatables!
I decided to design these two pool inflatables for two main reasons:
I have designed two of the most iconic pool floats, the Unicorn, and the Flamingo. I wanted to go further than just creating a ring, which is why I didn't design a donut or a pizza inflatable, but instead, I designed something more interesting to build. Both the Unicorn and the Flamingo pool float have necks that stick up from the ring, which I thought would be a fun challenge to build. They each come with their own stand for you to display. The whole set comes to a piece count of 1193, which makes it bigger than what you would think!
Let's look at each float separately:
The Unicorn
The Flamingo
The stands are 68 pieces each, which includes a 24 x 24 baseplate, three round 6 x 6 bricks, four 3 x 3 x 2 round corner dome top bricks, 59 tile bricks, and a round 2 x 2 tile. This set includes two new LEGO bricks, which are featured on the stands. They are 2 x 4 tile bricks with 'Unicorn Pool Float' and 'Flamingo Pool Float' printed on them. You can see them in pictures 9 and 10.
I think that this should be a good LEGO set because the two inflatables are fun to build and would look great as a desktop accessory. I am open to suggestions, so if you think of anything that would make this set better, feel free to leave them in the comments as I will do my best to update this set in the future. You can also leave any questions you have about the set in the comments, and I'll do my best to answer them!
I enjoyed designing this set, and I am really happy with it. I hope you like it too, and thank you very much for your support!