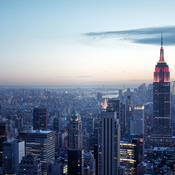 The SLS Rocket is an American Space Shuttle type, expandable launch vehicle designed by NASA. There are 3 blocks (types of rocket within the SLS program) that are being designed Block 1, Block 1b, and Block 2. This model is a representation of the SLS Block 1.

Missions for this rocket have been devised but not executed yet. These missions both include the Orion Spacecraft (this capsule holds the crew). The first mission is where the Orion Spacecraft will orbit the Moon; the team will be testing instruments and doing calculations to prepare for the second launch. The second launch will take place after many Block 1b's and Block 2's launch for the preparation of the Block 1's mission. Their mission is to have the first people land on Mars.

The Orion Spacecraft can hold up to 4 astronauts, that is why I have included 4 in the set.

The SLS Block 1 set can split up like it would in space and can be attached to the stands easily.

This set also comes with an accurate model of an RS-25.

Both models come with information stands which are fully detailed.

The Mars Rover is to scale with the Minifigures.

More information on the Block 1: