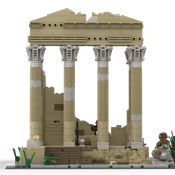 By Rome lego
20 comments
I present you my interpretation of a Roman triumphal arch inspired in part by the Arch of Constantine.
Being a fan of the first hour of the Roman Empire, I decided to make this MOC in order to finally see sets from this great period unfortunately forgotten by LEGO. Its current appearance and its scale adapt to the minifigure allows as much to expose it alone as to integrate it in a city such as a modular. It's perfect for adding an original and atypical touch to a city.
It is a triumphal arch as can be found throughout the Roman Empire. This one is particularly inspired by the Arch of Constantine located in Rome right next to the Colosseum.