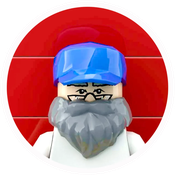 This Pippi Longstocking model is my second Lego Ideas project - and the second from the great children's book author Astrid Lindgren. Pippi is true Girl Power - many decades before that term was invented!

More about Pippi from Wikipedia:

Pippi Longstocking (Swedish Pippi Långstrump) is the protagonist in the Pippi Longstocking series of children's books by Swedish author Astrid Lindgren. Pippi was named by Lindgren's then nine-year-old daughter, Karin, who requested a get-well story from her mother one day when she was home sick from school.

Nine-year-old Pippi is unconventional, assertive, and has superhuman strength, being able to lift her horse one-handed. She is playful and unpredictable. She frequently makes fun of unreasonable adult attitudes, especially when displayed by pompous and condescending adults. Pippi's anger is reserved for the most extreme cases, such as when a man ill-treats her horse. Like Peter Pan, Pippi does not want to grow up. She is the daughter of a buccaneer captain and as such has adventurous stories to tell. She has four best friends: two animals (her horse and monkey) and two humans (the neighbor's children Tommy and Annika).

After initial rejection from Bonnier Publishers in 1944, Lindgren's manuscript was accepted for publication by Swedish publisher Rabén and Sjögren. The first three Pippi chapter books were published in 1945–1948, with an additional series of six books published in 1969–1975. Two final stories were printed in 1979 and 2000. The books have been translated into 64 languages and adapted into multiple films and television series.