By Jeddy and Daddy
109 comments

"So, Ratpus, what have you got for me?" enquired Gazgob the Wizard, his voice echoing around the large cavern.

Ratpus considered his next words carefully. This was the first time he'd ever had personal dealings with the famed (and if truth be told) feared goblin wizard. And if the stories were to be believed, Gazgob had a short temper and a long memory... not a good combination in someone who could set light to you with the flick of a finger. Apparently.

"Well, you wanted versatility and choices... and so instead of just making you one war machine... I thought to provide you with three!" he declared a most leering and sycophantic flourish. 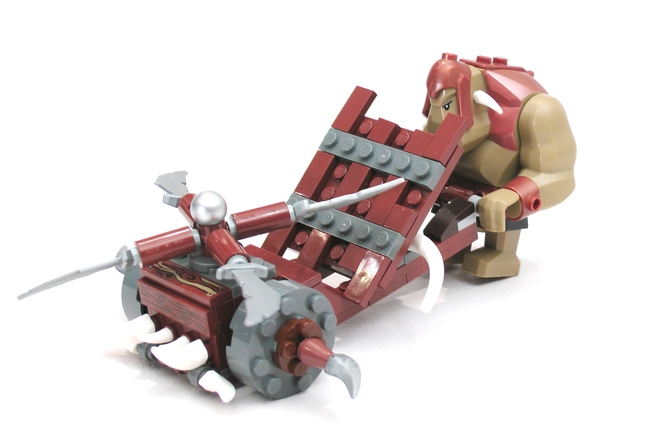 "Go on," the Wizard replied, giving very little away, much to Ratpus' disappointment.

"Erm... Yes... so..." Ratpus stammered, before recovering admirably. "The framework is the same for all three, more or less and each one is pushed by one of our more stupid trolls."

"More stupid Ratpus? Is this not a more dangerous state of affairs when they are pushing these machines near our troops?" enquired the Wizard once more.

"Not at all, quite the opposite your wizardness. The stupid ones are normally the strongest, and tend to obey their very last order given... until they are given a new one. You see we need one goblin to drive one troll, which in turn will drive one war machine."

Ratpus paused, watching Gazgob for any evidence of his pleasure or displeasure as his words sink in. If he knew any better, thought Ratpus, the wizard seemed to take twice as long as most trolls to understand anything that was told to him. 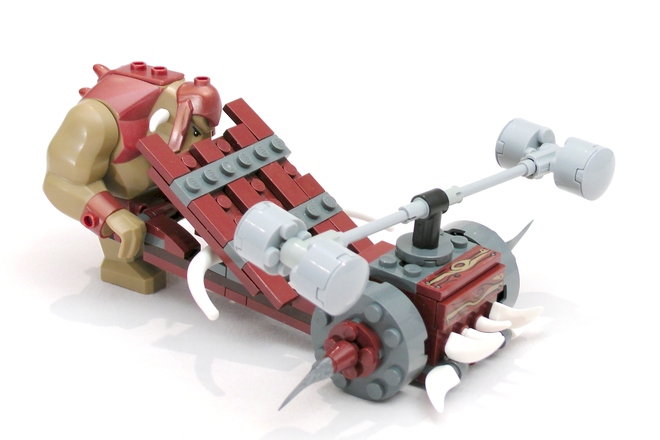 "Okay," nodded Gazgob as he waved dismissively in Ratpus' direction, "You mentioned choices?"

Ratpus felt a flush of heat wash over him for some reason.

"Er yes, Wizard Gazgob. Three choices," replied Ratpus whist removing some big sheeting from each of the three machines, revealing them to the Wizard for the first time.

"The slasher here, has four spinning blades, the basher there has two spinning hammers and finally the masher, my personal favourite as I get to ride on it rather than walk behind the troll, has the two hammers striking up and down in front of the wooden shield. Actually, through the shield to be precise." 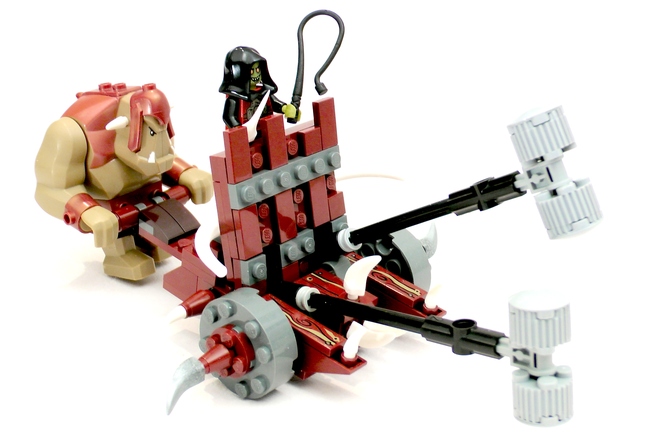 "Ah yes," interrupted the Wizard, "I remember seeing those during our last battle against the humans. What were they from?"

"They were from some sort of field ka-non. Or at least I think that's what they call them. Never seen those humans fielding those kind of infernal weapons before. Perhaps they of Dwarvish origin my Lord? Anyway, a fat lot of good it did them. Eight large explosions and a horrible mess in their lines that our chariots managed to charge through with great success. You must have been proud of your brother seeing him rout the enemy before the rest of us got half way across the battlefield?"

No. Definitely not the right thing to say. Ratpus could actually feel the air around him start to feel hot. And thicken.

"You presume rather too much Ratpus for a cobbler of... machines," Gazgob the Wizard spat the words out with slow, and rather deliberate menace.

"The fact that my brother was fortunate enough to take advantage of Dwarvern incompetence and misplaced human trust is one thing... a fortune that has been extended to you only as so far as that you have been gifted nearly three pieces of wood and metal... scavenged to protect our worthless trolls from the inevitable missile barrage that will invariably come their way. And I truly like what you've created. They will beget more chaos and mayhem than any amount of damage that those hairy rock eaters' faulty weapons can cause."

A final pause. Ratpus was beginning to realise, as beads of sweat poured down his back, that perhaps the Wizard wasn't as slow to comprehend as he had once imagined. Just slower to speak as quickly as most goblins. A trick that Ratpus wonders he should have learned.

"But do not EVER tell me who or what I should be proud of. And certainly not my STUPID SHINY BROTHER!"

And with that, Gazgob the Wizard turned to walk out of the chamber, leaving a rather hot, and incredibly scared Ratpus, with his war machines. And a faint smell of singed hair. 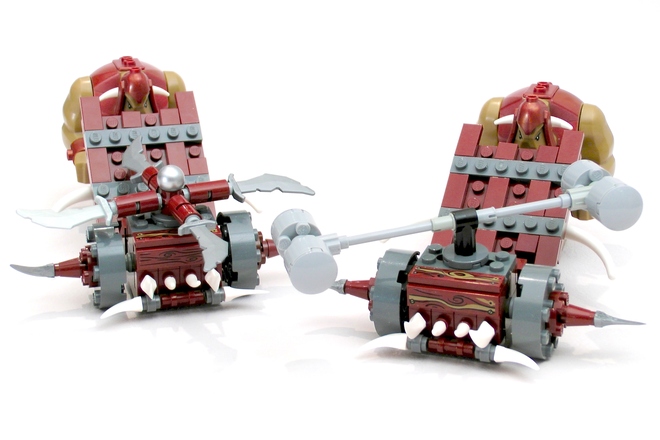 DESIGN NOTES : On request from A.S. in Melbourne, Australia, I was asked to build something else that inspired the Troll War Machine. The frame had to be precise and universal, so that with a change of weapons, different variants could be made. Once that structure was fixed, the rest followed relatively quickly.

However the troll looked particularly exposed and posed issues strategically. It is all very well having a big troll pushing one of these things towards the enemy, when it clearly would never arrive at its destination. A hail of arrows would soon put paid to that.

There was, however, space on the frame for an angled pavise to help protect the aforementioned troll which I hand designed to hand from a dwarf siege engine of mine. This was in order to allow the troll to see over (or more precisely) across the top of the wooden defensive shield but still protect him from harassment by enemy missiles.

That's when the idea of a 3-in-1 set hit me. All three war machines had their strengths and weaknesses, but Trolls (in my mythos) are too stupid to design them (or steer them well) on their own. So I added a goblin with whip to peer over the top of the Masher or to walk behind the Slasher / Basher in order to "steer" the troll that way.

And with all 3 variants sharing the majority of elements it made sense to offer a 3 in 1 package... Buy just one set and build all 3, but just keep the one you prefer. But buy three sets, and you could field them all on the battlefield at once. Now that really WOULD punch a tidy hole into any army's front lines! 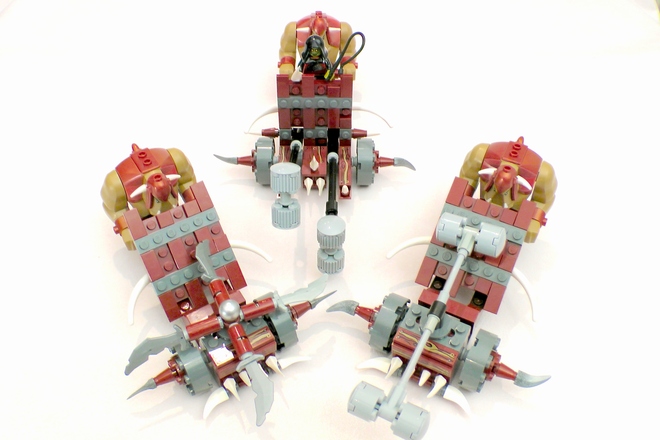 My IDEAS dream would be to see a whole line of Castle/Fantasy sets that will allow all ages of fans of LEGO and tabletop gaming to come together, in order to help everyone learn strategic thinking, teamwork and planning, basic arithmetic, tactical awareness and simple probability.

Please support and share in order to help this dream become a reality! You can follow the progress of all my projects in this range here: https://ideas.lego.com/profile/Jeddy%20and%20Daddy/projects

By Jeddy and Daddy
109 comments