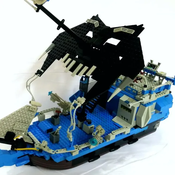 By MorrisCR
15 comments
From the deepest outer space here comes the Crawltron, renegades that were in hiding since 1998, when Lego gave us Insectoids. Ever wonder why that theme had a single faction? Well, now we are ready for the nemesis. It is about time to rise and plague the galaxy with their might. No need to be afraid, though. Some space paladins will come to the rescue!
Inspired by those space themes from the eighties and nineties, I created these vehicles in which I tried to keep that nostalgic feeling from older times but incorporating a more realistic style.
This Idea includes two different vehicles and 5 figures to complement them.
The first and main assembly is the Rhino Beetle tank, a heavy armored vehicle that travels on four wheels and 6 legs to deliver all its powerful presence composed by a full impenetrable armor, its main railgun located on his horn and multiple anti-aerial antennae.
It includes a fully in-closed cockpit for a single pilot with all necessary driving instruments.
The second assembly is the Fire ant, a supporting and scouting vehicle on six legs that can go almost anywhere due to his anti-gravity capabilities. Check out his antennae with multiple detection devices for a high-level reconnaissance.
Between both vehicles, there are approximately 400 pieces in total, making it a medium size project that can be easily built by kids and adults alike. Not only do they have play features like movable parts but also they will fit in any space collection. I do not used software or renders only actual Lego pieces.
Five minifigures add more value to the set, they are:
A reissue Craniac from Space Police 3. For those of you who don’t know him, he was secretly part of insectoids but was expelled due to his radical ideas.
A re-imaging Insectoid grunt with a different color pattern.
Three completely new and original figures from my imagination:
Skia Fonis, a communication specialist
Yper Dinami, a mechanically enhance specialist
Sind Stal, a multi-role android.
If you like this proposal, please support it. You can also help with comments, following and sharing.
I have some other Ideas you can check out.