Narnia: Through the Wardrobe

For a long time, and especially since the release of the Chronicles of Narnia film franchise, LEGO fans have been building, creating, and designing Narnia-related sets. And it is no wonder - the series is full of action and adventure, as well as strong male and female characters that children can identify with. Plus, the story affords the LEGO Group the opportunity to invent new parts and bring more rare pieces into more common use. For example, a new piece that might be used is centaur legs. Beavers are animal figures that we have not seen before in LEGO but would be a must for Narnia. Minotaur headpieces could be reused. All in all, Narnia could be a very profitable venture for the LEGO Group.

This set is my first in a series that I will make that will span the three films already made, and perhaps even take an imaginary look at some of the other books that have not yet achieved film status. My goal is always to design sets of a high quality. 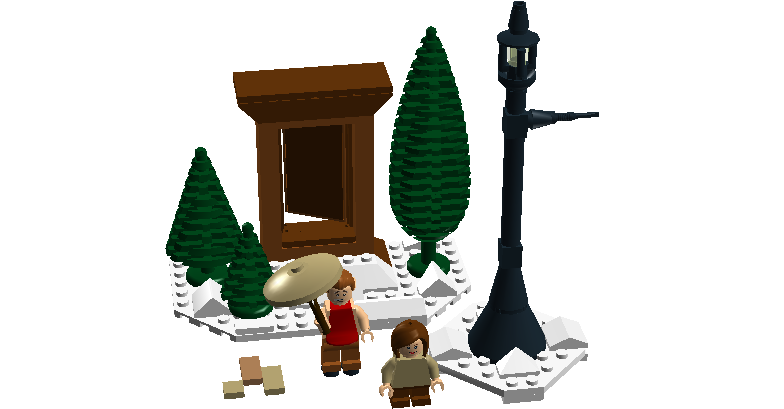 For the first in my Narnia series on LEGO CUUSOO, I have chosen perhaps the most iconic scene ever in the Narnia series - when Lucy Pevensie ventures through the wardrobe and meet Mr. Tumnus the faun near the lamppost.

This set would be a medium-small set and would probably cost around $19.99 in USD.

It would include two separate building sections, two minifigures, and a few accessories. The first section to be built would be that of the wardrobe. It features a wardrobe designed after the 2005 film version, built using red-brown and dark orange bricks. The door has three panels, reminiscent of the carved panels seen in the movie. These panels could have printing on them representing these carvings, or they could be applicable stickers. Below, you can see a view of the wardrobe from the front side. The baseplate on which the wardrobe is built would also include three pine trees. 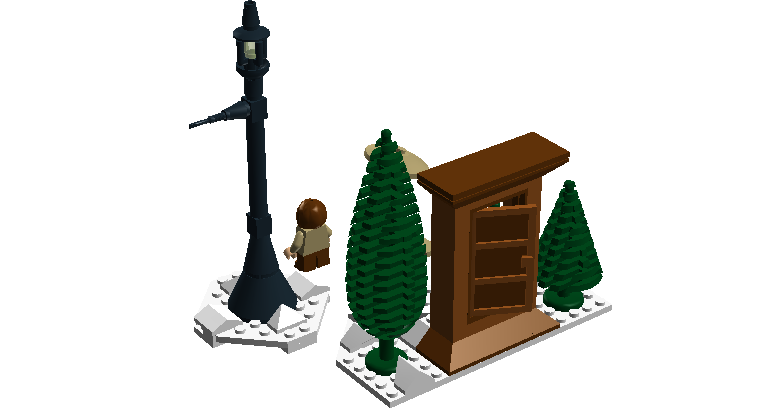 The set will include two minifigures, both with double-sided faces: Tumnus (with a double-sided scared/happy face) and Lucy (with a double-sided scared/happy face). Tumnus' torso and face would be light flesh. His hairpiece would be the same as the elf from the Collectible Minifigures series, with the addition of two small horns. The coloring would be dark orange for hair and light flesh for the ears. His legs would also be dark orange to match his hair color. They could be either regular legs or two 'wooden' peg legs (to make it look more goat legs). Either choice would utilize black circular studs on the bottom to act as hooves. Around his neck would be a plastic 'cape' piece, functioning as a scarf. This cape piece would have black printing on it, depicting the frays and creases of the scarf. Tumnus' accessories would include an umbrella and three packages.

Lucy's minifigure would be based on her appearance in the 2005 film, including the printing on her torso. She would be sporting short legs as she is the youngest of the children. She comes with no accessories of her own, though in the film she does assist Tumnus with carrying his packages.

I hope that you agree with me about the great potential that Narnia LEGOs may have. Continue to check back as I expand my set designs for the Narnia line. I will post links here to new projects as they are approved. Thank you for your interest, and please consider clicking 'Support'!