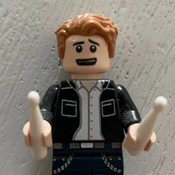 By NG bricks
30 comments
For my project Idea, I created this Video Game Tower. Basically, it is a tower where each floor is a level of the video game, the final floor is the boss level. There are a total of four levels with one team for levels one, two and three, and two teams on level four. As characters travel up the tower, they can increase their strength, gaining new weapons and abilities.
On level one, characters must fight skeletons and eventually defeat the ice monster that has frozen the second half of the level. Along the way the heroes can claim power-up cubes and stop at the garden guarded by a scarecrow.
On level two, the next team must fight robots and defeat the evil supercomputer. Along the way they must open doors (includes functional sliding door), avoid cameras and lasers, and blow open a glass wall (includes breakable wall). Additionally heroes can claim a power-up cube and stop at the store to purchase weapons.
On level three, the heroes must fight mummies, ostriches, and a giant snake. Along the way the team must climb over rocks and cross lava. After defeating the other villains, the heroes must try to claim the snake staff in order to defeat the snake and finish the level. Additionally, heroes can claim power-up cubes and gold.
On level four, the heroes must team-up with another team to defeat the boss villain in his giant Robot. The teams must use all of the strength and abilities they have gained on the lower levels to defeat the boss.
I think this would be a good product idea because it is fun to build and can be enjoyable for any age group. It has multiple functional parts as well as lots of characters and potential story lines. I created this idea because I thought it would be an interesting way to show the level-up progression of a video game.