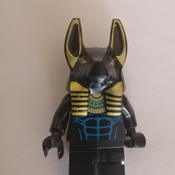 I love the starships that appear in science fiction movies, although they are usually completely impractical.

My first idea was to build the Rapier fighter from the Wing Commander film. I love the nose of those ships, but after I started building the fighter I found that the shape was a little simple and I did not like how the fighter looked in Lego.

For this reason, I started again from scratch, and after several experiments I finished this imaginary starship. Only the design of the nose is vaguely related to the Rapier. The objective was to design a medium-sized set, not too small and not too large.

I like the idea of a starship lego set not related with a franchise like Star Wars, Star Trek, etc. This allows more freedom in the design.

I chose the black and red pattern for a simple reason: there are the only pieces I have of the right shape. For this reason I call this ship Redhawk because of its red tail like those of the Tuskegee airmen’s fighters in WWII.