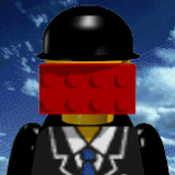 Agent Phil Coulson collects things. He preserves relics from the past, from the history of S.H.I.E.L.D. And Lola is his prized museum piece. She is a fully restored piece of S.H.I.E.L.D.’s history. Supped up by Howard Stark in the 1960s, Lola was once a lean, mean, spy agency machine.

Phil Coulson's red convertible is more than a dusty artifact. She’s more than a car. Lola is his greatest ally. She can fly. She can shoot. She has the world’s first GPS.

And now she’s taking to the sky to help the Avengers save the world.

Coulson’s red convertible is a mainstay of the cargo bay of the “Bus” in Marvel’s Agents of S.H.I.E.L.D. And it’s high time that it entered the LEGO Marvel universe as well.

This model of Lola uses the chassis of Nick Fury's hovercar from 76004 Spider-Cycle Chase, with some slight tweaks and modifications, a proven design which has already met LEGO’s design standards.

Pairing Agent Coulson with a few of the flying Avengers is a no brainer and adds to the play value of the set. Someone needs to help him save the world. I would suggest Iron Man and The Falcon, two other hotrod characters who love dressing in Lola’s own candy apple red. But any of the myriad Marvel allies could easily fill the slot.

Lola is swooshable. Lola is sleek. And Lola deserves to fly high.