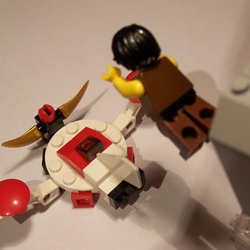 Dick Dastardly, the comic villain from Wacky Races, is a flying ace and members of the Vulture Squadron, a crew of aviators on a mission to stop a homing pigeon named "Yankee Doodle" from delivering secret messages.
"Dastardly and Muttley in Their Flying Machines" (this is the original name of the show/cartoon) is produced by Hanna-Barbera and was airing from September 20, 1969 to January 10, 1970 in 34 episodes.
The cartoon was a combination of Red Baron-era and Wacky Races (which featured Dastardly and Muttley in a series of car races), each story features variations on the same plot elements: the Vulture Squadron tries to trap Yankee Doodle Pigeon using one or more planes equipped with Klunk's latest contraptions, but one or more of the Squadron messes up and the plane(s) either crash, collide or explode (or even all of the above!)[Wiki]
I created the red biplane from the boss "Dick" and the "postman" pigeon, but my intention is to try to re-create all the squadron vultures. The propeller is made with the piece "Visual Light Link ø3.2mm" from the exo-force series.
See also my project wacky races on lego ideas