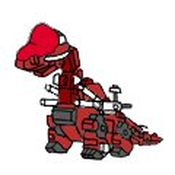 By RBOZ005
41 comments
The Concorde was the fastest commercial plane that ever flyed. Developped in the sixties, by both France and United Kingdom, the first plane was built in Toulouse. It was a supersonic, able to fly at Mach 2, faster than every other plane, commercial as military. The Concorde could fly from New York to Paris in less than 3 hours.
Air France and British Airway were the sole compagnies to use the Concorde from 1976 to 2003.
I built this one as a Lego City plane, but then, it has to be bigger, longer, as was the Concorde. I built several planes, using the châssis of the 8 studs large City planes, and it became natural for me to make the one that was the most emblematic plane of ever, the Concorde.
Actually, such a plane deserves an UCS version. Appart a little set, made only with standard bricks in the seventies, Lego didn't release a real Concorde. As was made the TGV some years ago, the Concorde should be made too, it is a worldwide known plane, even if it is not flying anymore.
I used body plane Lego parts that can be seen in the City line. But not for the nose and tail, that are longer and very particular. The tail was the most difficult to do. it has to be round, but it is not a simple cone. I remade it two times, and maybe it can be improved. The nose was also rebuilt several times. Unfortunatly, I wans't able to make it bend. The wings are made of plates, two stages with a third of long ones for the solidity. Technic parts were used for the landing gear, that can be removed, but not put inside the body.
The overall shape was really important for me, the wings and the drift had to fit with the real plane.
The model in 110 cm long (139 studs), 60 cm width (76 studs) and 30 cm high.