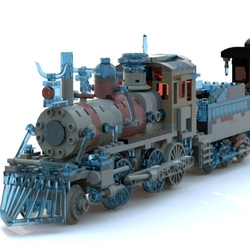 With the steam season starting up again, its time to fire up the locomotives for another year of adventure and crafting memories. Keeping in theme with Essex Valley #40, this is the second of three locomotive in the Essex Valley railroad steam fleet. Known today as #3025, she was aquired by the company in 2008 from the former Knox and Kane railroad. Formerly #58 for the Knox and Kane, this locomotive would haul passengers across Kinzua Bridge to the camp grounds in the mountain side. She was rebuilt following a devastating fire that occured during the transition and now functions once more as a fully opertating express locomotive to pull passengers along the scenic line. The coaches of choice are modelled after the current rolling stock used on the railroad today. In this set, #3025 sits eagerly for begin the day with the crew and conductor checking the train over to ensure all is inorder. During which passengers gather at the station ready to emback on the journey ahead. All is required now is you at the throttle.

The photos From left to right are: the over view of the set, left side view of #3025, right side view of #3025, cab and tender detail, coach side view, figures of the set, and a picture of #40 and #3025 double heading an excursion train. The train is highly detailed so all the pipes and rails seen match the real thing, while featuring a sturdy frame for play.

This set is comprised of:

a) Locomotive with smoke effect

b) Tender with coal load