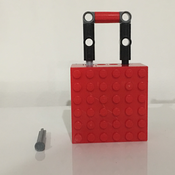 This LEGO padlock could be used to keep anything safe. With a two step unlock this is a great lock compared to the other ones which you can flip over to unlock. Also this lock can never get jammed because it has two places to unlock from.

Check out this video for more information

Do you know how annoying it is when someone breaks into your stuff ?. This would make a good LEGO set because it would stop any intruders from breaking in. I approached this set design with a lock in mind that has a two step unlocking mechanism because, the one step unlocking mechanism would not be useful because you could flip over the lock to open it. The second idea I had in mind was a lock with two places that you could unlock from so if one gets jammed you could use the other place to unlock from. I really hope that this idea could get 10,000 people to support and this would become an actual LEGO set.