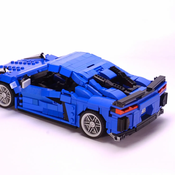 -          Fully modular, 4 level castle with tower
-      Three independent spiral staircases
-      Multi-level rear wall swings open to reveal interior details
-          Light bricks illuminate fireplace and stained glass window
-          Rises 30 inches tall, matching the height of the Lego Disney Castle
-          Pressure-activated spike trap in the front hall
-          Hidden lift rises out of the floor with switchable displays
Features:
This massive Lego castle features four separate, fully modular levels, including a dungeon below the bottom level, viewable from the back. The tower and roof can be removed to reveal a detailed library with four bookcases, a reading table, and several busts off to the side. Overlooking this library is a small loft complete with a desk and lamp. The second floor contains the dining hall and a display of armored statues, while the first floor has an armory, stables, and the entrance hall. Push down on the pressure plate at the door to release the spike trap, set just inside the front door! Reset the spikes by pushing them down and pulling up on the torch. In the armory, a section of floor rises up, operated by a pulley system, to reveal the king’s personal armor. After lowering it back down, pull an exterior lever to switch to an alternate hidden payload - the king's treasure!
Three levels of spiral staircases will take you all the way from the dungeon to the library. Reach the guard tower after climbing the final set of stairs. Built into the front cliff, a concealed rock door can slide aside to reveal a ladder to the base of the castle. This set also features two light bricks: one bringing life to the roaring fire in the grand fireplace and the other back-lighting the stained-glass window in the front. Sophisticated building techniques allow you to operate both light switches from the rear of the castle without disassembly.
Building Techniques:
The base of the entire castle is supported by an incredibly strong Technic frame; the wooden beams in the dungeon conceal some of these load bearing elements. Two spiral staircases have been integrated into the spire walls. Further strengthening this structure, each stair is also connected to the next tread making it rock-solid. Each level features an opening back wall that connect together when assembled. This allows for versatility - showcase the full interior while stacked or separate vertically for maximum access. The entire floor has been covered with black minifigure display plates (from the Minifigures Series) to create an effect of shining floors, while at the same time allowing minifigures to lock in place for the perfect display angle. Completing the wooden front doors are golden handles built from the Lego ring element. All of the castle guards share the same golden lion emblem on their chest plates. To bring this theme front and center, the Lego Chihuahua is converted into a stately lion "gargoyle" using golden teeth elements to create its mane. Finally, to top off the castle with a very realistic medieval look, greebling was used to add detail to the roof.
Appealing to young children and collectors alike, this castle has tons to play with and is an impressive display piece.
Send in a vote to support Chateau de Lego!