This is my new version of my old Television Station Set.

I followed your suggestions: I added more windows and I changed the design, for a modern looking. I added some photo of the old set for comparing.

- the Ground Floor includes the hall, with two seats for visitors, some flowers, a big TV, a desktop for the secretary with a PC and a telephone; and it includes an office for the technical, and this room works as warehouse for his tools and as Relax Room for the employer, because it includes two chairs and a coffee machine. From this room you can go upstairs. 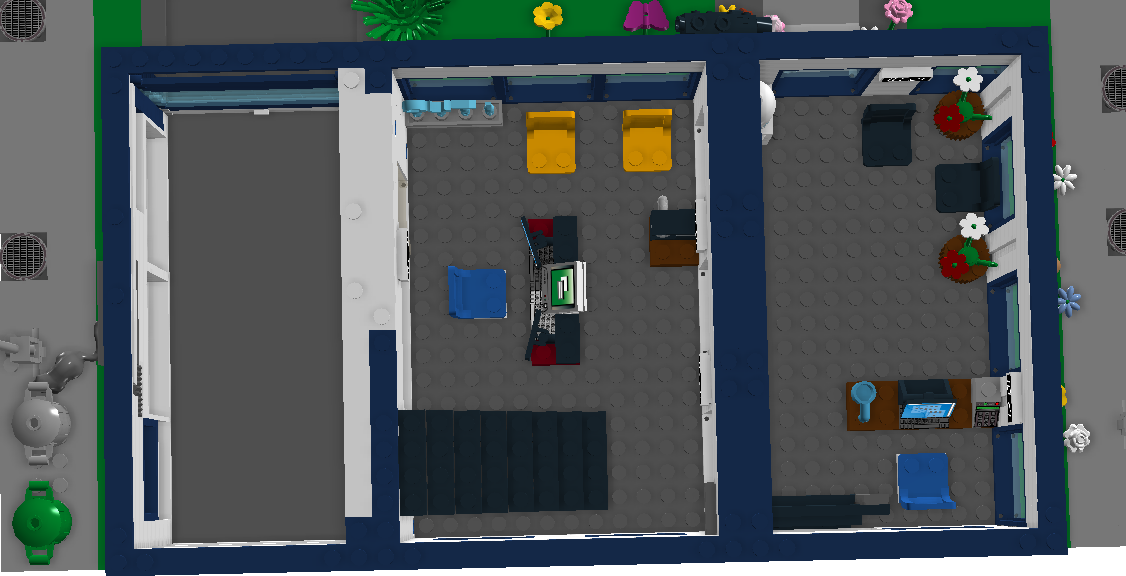 -the First Floor includes an office for the make up artist, a storage and a studio for a cooking program.
In the office you can find seven wigs, a desk with a mirror, an hair dryer, a brush, a lipstick, a mascara, two perfumes, a pair of scissor, a small mirror and a mobile phone.
In the storage you can find three microphones, two fire extinguishers, three cameras, four spotlights and two helmets for using the TV News' helicopter.
In the studio you can find two cameras, two spotlights, two desktop with pies, pizzas, glasses and bottles, two ovens, two burners with two pans and two pots, two pipe extinguisher, a clock and a cup for the winner. 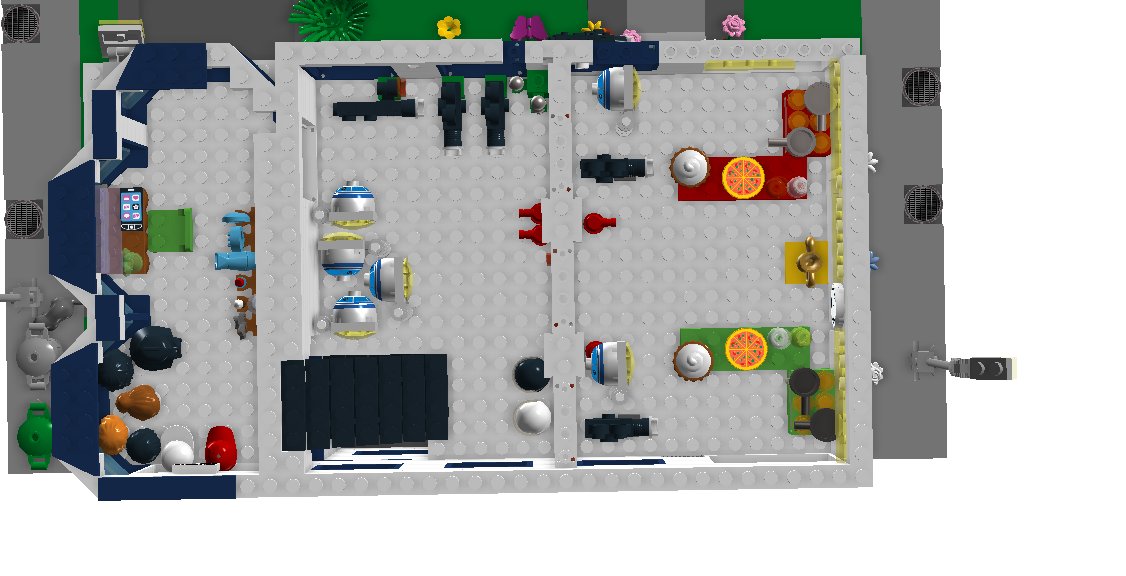 - The Second Floor has got two studios: one for the news and one prepared for a talk show. In the news studio there is a monitor, a coffee mug, a newspaper, a spotlight, a camera and a post for the journalist.
In the other studio there are two spotlights, two cameras, a plant, two swivel chairs, a little table, a desktop with a bottle of water and two mugs.
From here you can access the little heliport. 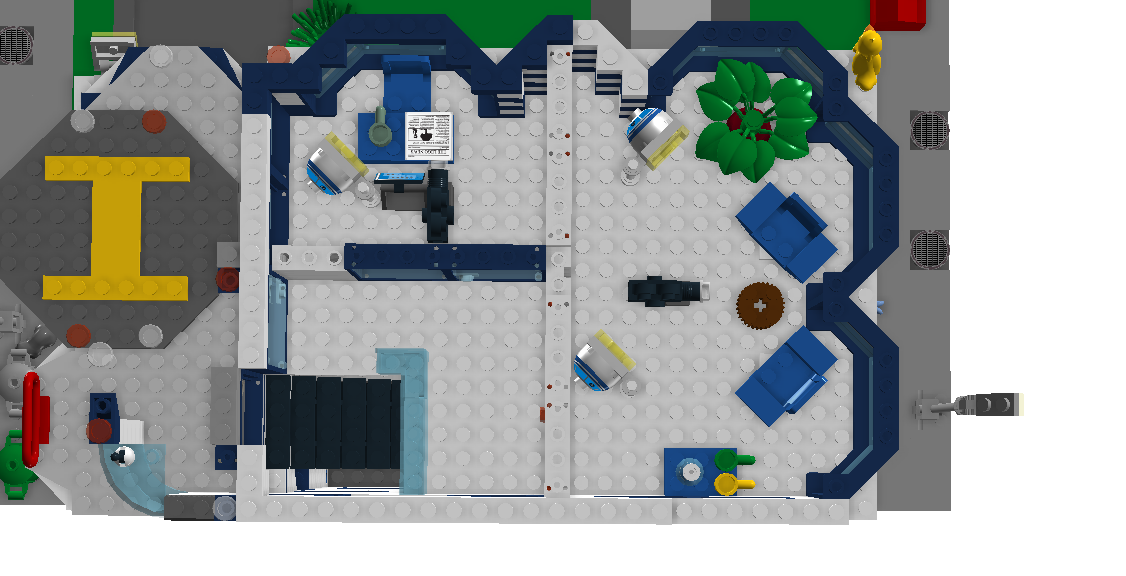 - The Garage is the park for the news van. Above there is the makeup studio and the helicopter park. 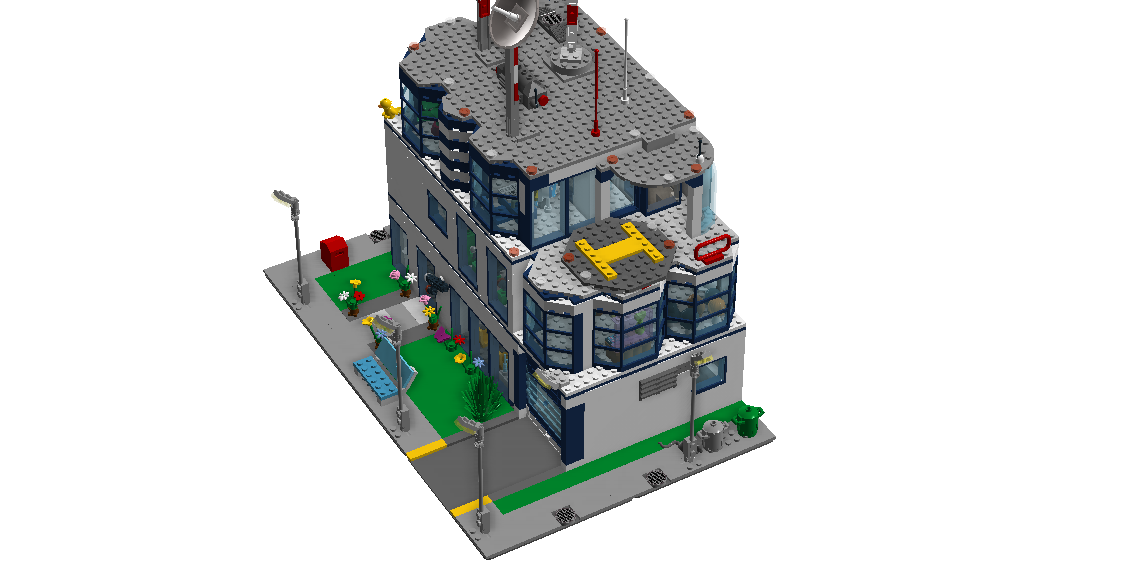 - The Roof has got one rotatable antenna, two big antennas, a medium and a small ones. There are position lights too for locate the building during the night when the helicopter is landing / take off. You can attach a yellow bird provided in the set. 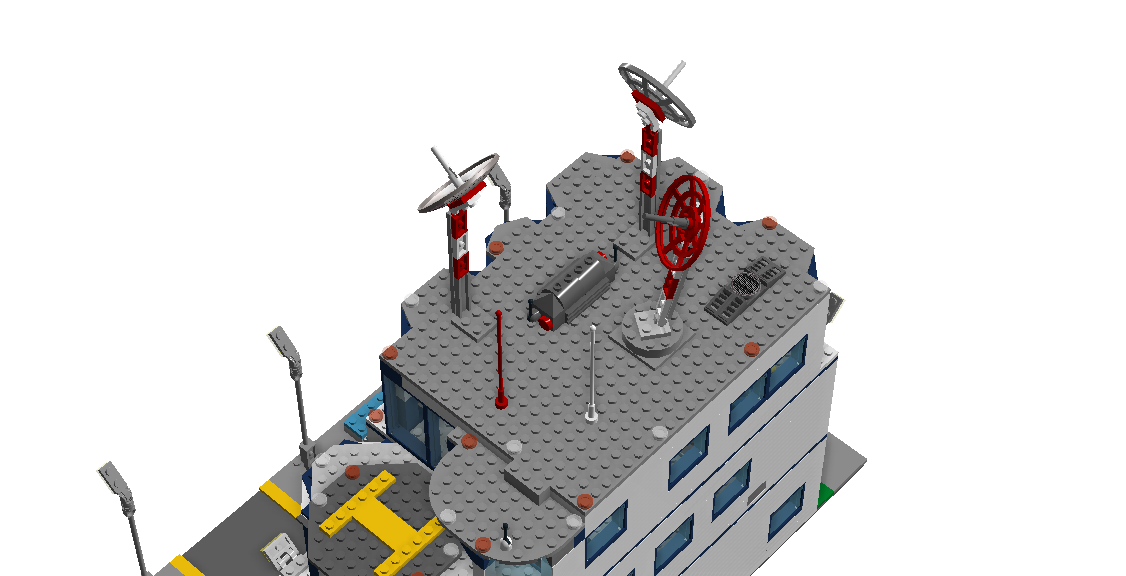 - The Small Garden enclose the building. There is a sidewalk, two coloured garbage bins, a mouse, a letter box, a bench, five street lamps, a bush, some flowers and four sewer covers. 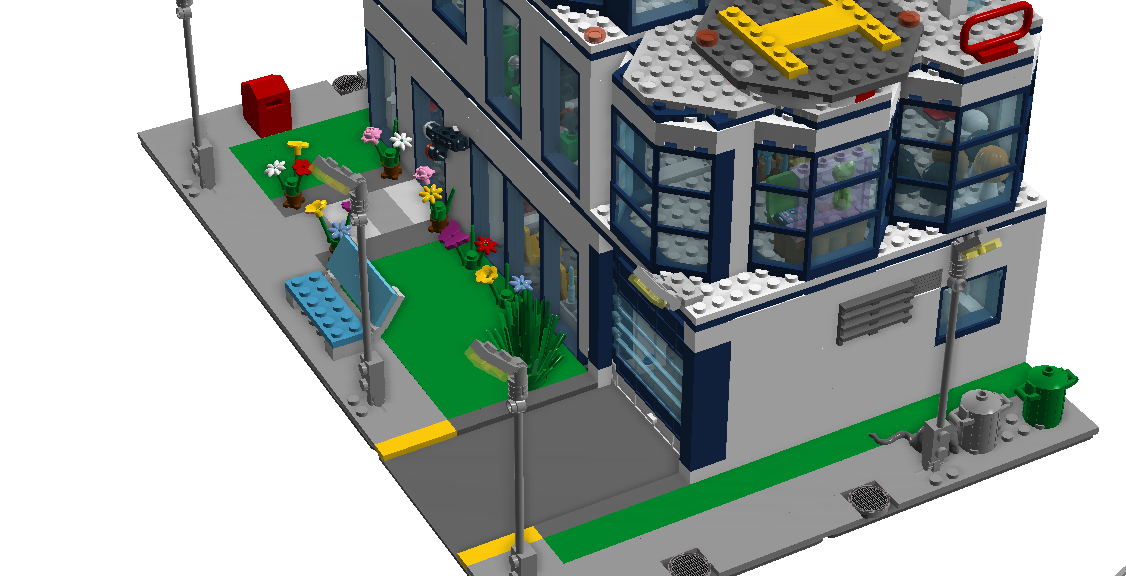 The set includes two vehicles too:

- the News Van has got two seats, one camera outside and one inside, a walkie-talkie, a microphone, a mug and a rotatable antenna; 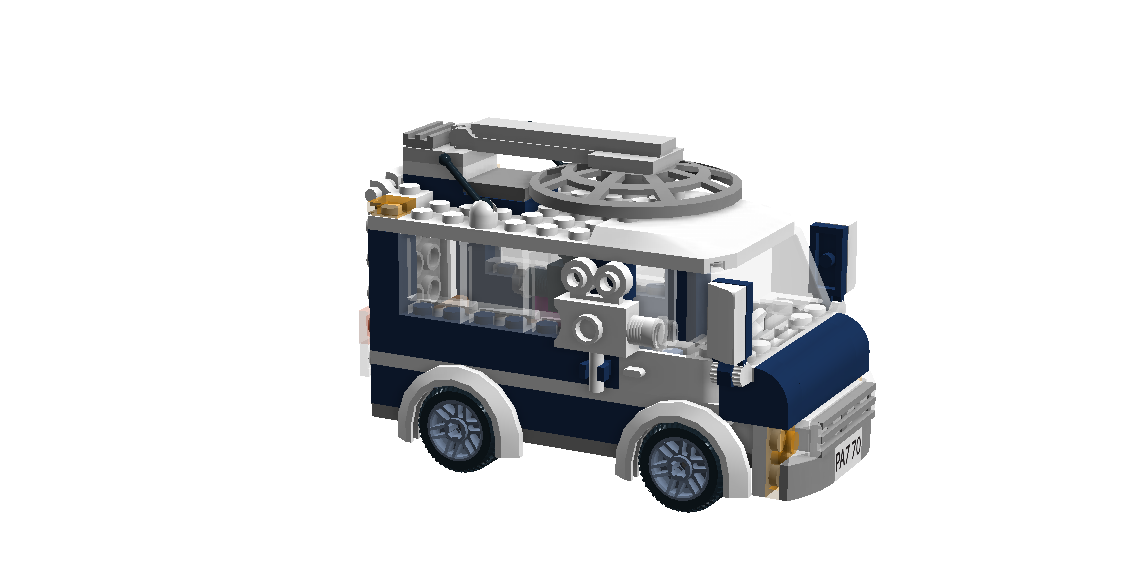 - the Helicopter has got a microphone, two cameras (one inside and one outside) and he can transport only two minifigures. 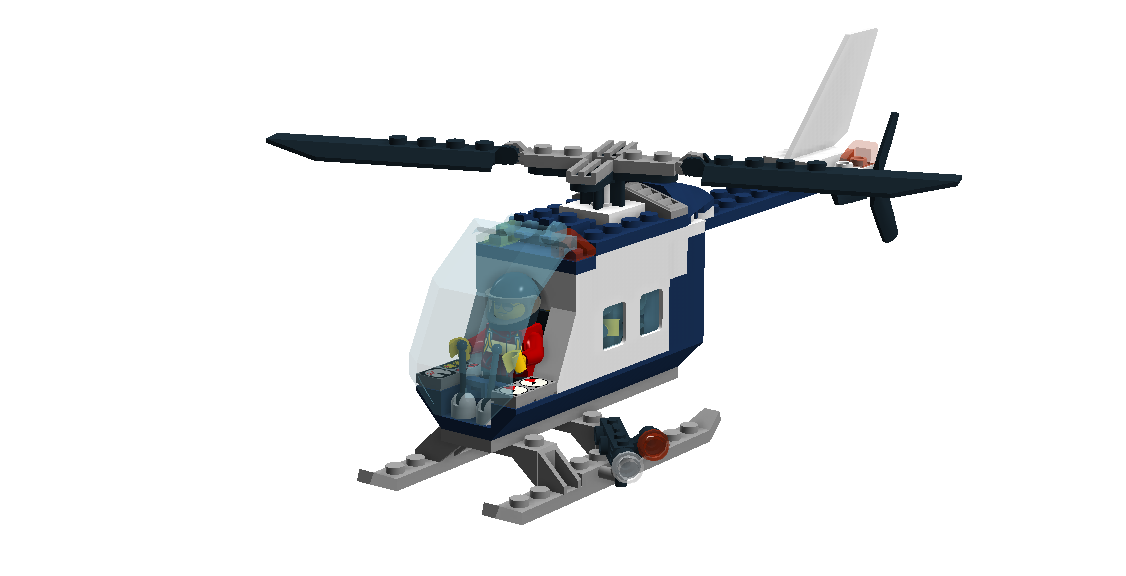 The set includes twelve minifigures, a bird and a dog. 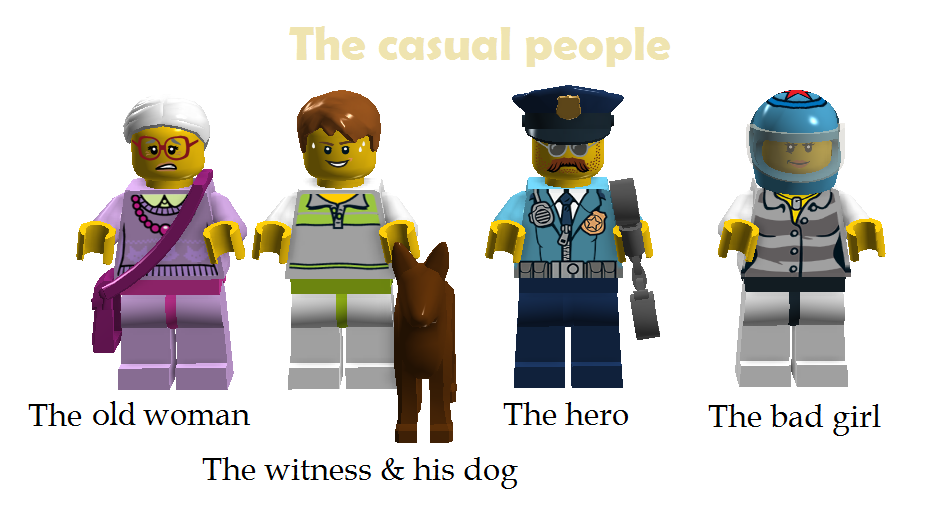 I think that the set should have some stickers, so I created someone; but I think that more stickers could improve the model, maybe someone on the helicopter tail and other for recognize the studios (maybe with numbers).

P.S: for any suggestions or questions, leave a comment!

P.P.S: remember to check my other projects ;)