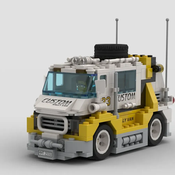 In all humbleness, this model is a tribute to the 5550 Custom Rally Van from the Model Team series, released in 1991.
The 5550 Custom Rally Van was one of the first larger LEGO models I got when I was a young kid, and for me back then it was kind of priceless. It might pale in comparison to cars from today’s Creator Expert series in design and construction technique, but given the diversity of available LEGO bricks 30 years ago, this was a really nice model with many details.
The LEGO Model Team series went on from 1986 to 1999, with a reissue in 2004, while probably the most iconic models were made within the first ten years of the series. The series was kind of a hybrid between Technic and Classic/LEGOLAND/City, and as for the car models I would say it was the predecessor of the Creator Expert series.
The overall scale of this mini model is 2:3, although not to every detail. It consists of about 304 parts and two minifigures. My goal was to be true to the original and pass on as many details as I could, so the scale of the various details vary. Given the low ground clearance, the car appears more like a street car than a rally car, but that was a way to include more details, and I think it gives it a cool look.
I will bring updates whenever I make changes.
I hope you like it and give it your support :-)