Bionicle: The Return - The Great Being Angonce

By Xendor
0 comments
Credit for the main image goes to WipeoutZone. Thanks, dude.

Angonce is a Great Being, a species that created the Orbalan, Agori, and Matoran universes. He was the scholar of the Council, and was selected to remain behind to watch over the Agori. He kept a record of all the major events that happened, beginning with the shattering of Spherus Magna. No one knows where his library is, as he has kept it hidden from everyone, in fear that people will use his information for destruction. 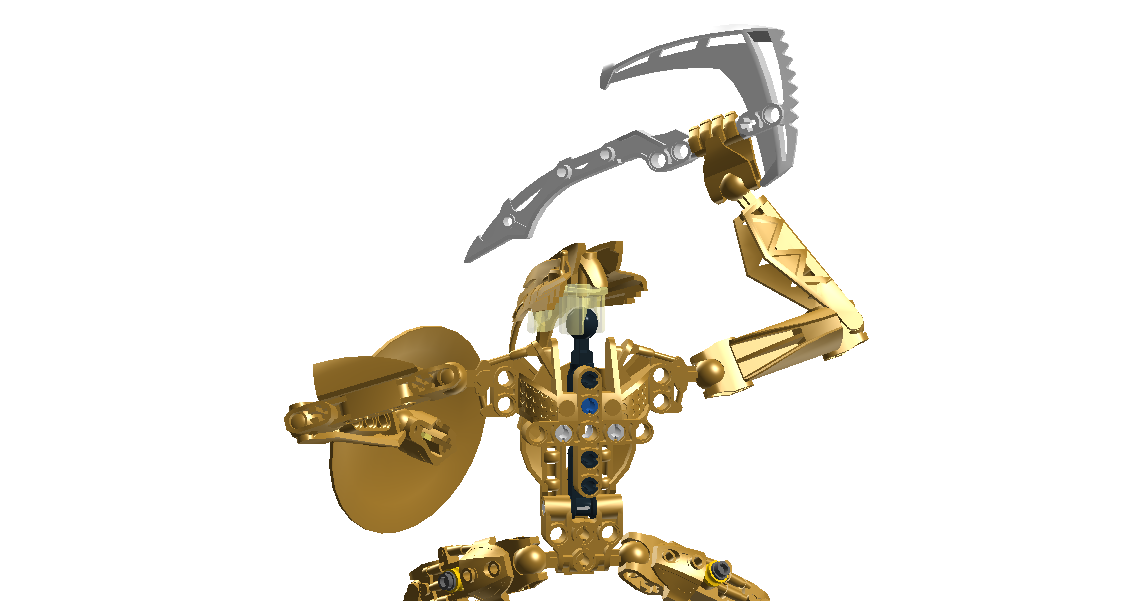 During his time after the Shattering, Angonce kept himself hidden in plain sight. He pretended to be a Glatorian most of the time, revealing his identity to only a few.

When the Mask of Life came to Bara Magna, Angonce felt its presence. However, he didn't sense the Mata Nui robot. After the battle against at Roxtus, many Agori claimed that they saw him separately fighting against the Skrall.

When he heard that the new comer was Mata Nui in the form of a Glatorian, Angonce knew there was something wrong. He went to the location of the new "village," only to find that the Agori had unconsciously rebuilt the Prototype Robot. He discovered that Mata Nui had gone to where a rumored maze was. Angonce knew they meant the Valley of the Maze, so he followed to make sure Mata Nui succeeded.

Sure enough, Mata Nui returned with the energy source for he robot. During the final batte, Angonce contributed his abilities to assist the Glatorian, and even convinced a few knowledge seeking Skrall to change sides. As soon as the fight was over, Angonce and his new-found allies fled.

Later, he discovered that the Marendar, a back up incase the Toa turned evil, had escaped. Later, during his hunt for the dangerous creature, he came upon the Shadowed One, and his growing team of Dark Hunters. After forming an agreement, though without exposing his true identity, they hunted and destroyed the dangerous creature. Angonce then revealed his identity, and thanked the Shadowed for his help. He then offered that they could work together, to fight for good. After much debate, the Shadowed agreed on the condition that Angonce reversed the aging curse Voporak accidently threw on the Shadowed during combat against the Makuta that made him over 3000 years older. 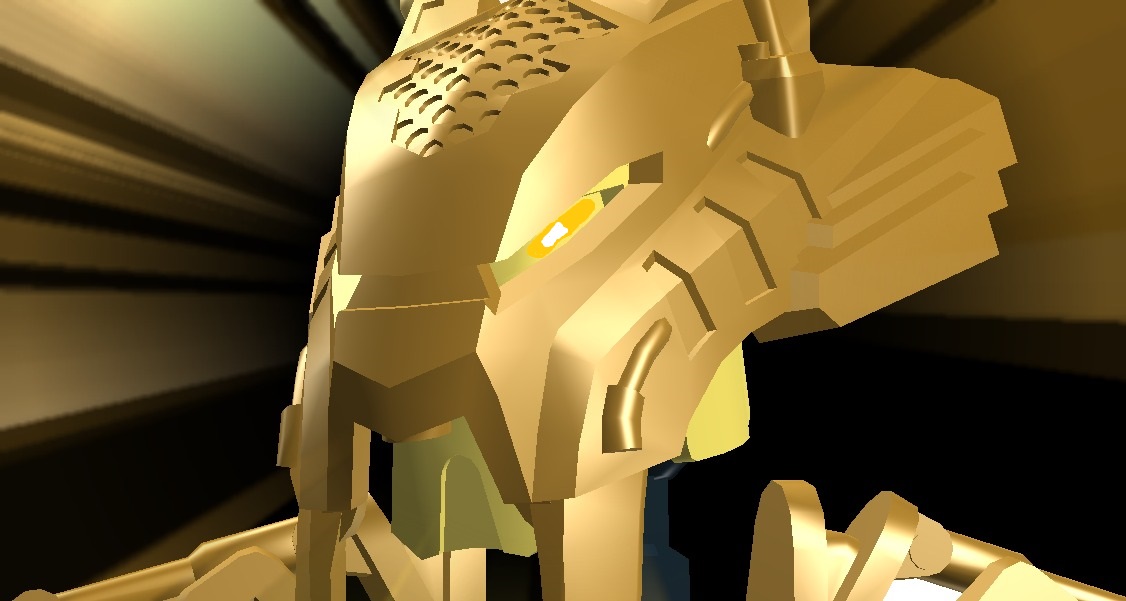 Now, Angonce and his Dark Hunter allies are preparing for a war Angonce knew was coming. A single Orbalan is gathering an army of her own, and he is not going to let her win easily.

I am wanting to make an advertising image for the entire series, but I don't have the software to do it. If you would, please go to my Facebook page (Xendor), like, and tell me of what kind of software is out there. I must inform you, I am on a tight budget, so free software or online editor would be best.

New to this series? Go to Bionicle: The Unknown to read Chapter 1.

One of the Young Turaga, apprentices of the Turaga Metru, had gone to consult the Mask of Life, in hopes that it would finally reach out with its wisdom. But no words, or connection of any sort, came from the mask. Even Gali tried contacting Ignika, but for no response. Now, Gelu, Takanuva, Vakama, Berix, Jaller, Mazeka and Gresh were gathered in the Council Lobby.

Gelu: So, we must fend for ourselves.

Takanuva: And it seems that our newfound enemy is forming a team. Already, she has gathered a Dark Hunter, a team of rogue Bone Hunters, and a team of Bota Magna Vorox. But what they’re doing is a mystery.

Vakama paced across the Council Lobby, stroking his chin.

Vakama: My apprentice wasn’t able to contact the Ignika. And Mata Nui cannot give us the guidance we once had.

Berix: What about the Red Star? Can’t we contact them?

Nokama: We’ve made no discovery of a way to contact them. Unless you want to go up there. But I should inform you, the last time one of our own went up there, it was near suicidal.

There was a knock on the front door. When opened, they all focused on one thing in particular: the Mask of Shadows.

Jaller: Freeze! Who are you?

Mazeka: Wait! This is the light Teridax!

Jaller kept his Cordak blaster up.

Jaller: Just to be sure, if you do anything funny…

Vakama: What is it you seek, my friend?

Teridax: Only to warn you. I am at present unable to help you in this area, but I fear the war will spread throughout the entire planet.

Gelu: What makes you think that the threat is that big?

Teridax gazed across the lobby at everyone there. His eyes eventually rested on Takanuva.

Takanuva thought for a time.

Takanuva: An obstruction in between.

Teridax: There is still an obstruction. A shadow is not yet gone.

Vakama: What is this shadow?

Teridax: One you’ve faced before.

Tyrant and the Unknown were staring into an abyss. There was a ladder that went down, but it seemed to be miles deep.

Unknown: The army is down there.

Tyrant: After the “Final Battle,” the Toa, Glatorian, and their puny friends dumped both Rahkshi and Vahki into this pit. And about ten percent of the Bohrok were…

Unknown: I don’t know what you’re talking about. Be more specific.

Unknown: And where are we?

Tyrant: The Mouth of Teridax.

The Unknown looked up and around. Of cource. This is part of a humanoid structure that hosted billions of Matoran and Toa. But then…

She looked around, to see a village about fifty miles away.

Tyrant: If you succeed, by the time they notice, it will be too late. Now, come on, your army awaits.

The Unknown, Tyrant, and a few of their Bone Hunters climbed down. After ten minutes, the Unknown got tired of climbing down.

Unknown: Ah, let’s get this over with.

She jumped down, only to land about twenty feet down.

Tyrant: The bottom must be closer than we thought.

Tyrant then looked at the ladder. She then realized that the ladder was really moving quietly upward. It was so quiet, they didn’t even notice.

She then charged it, and pinned it. A few Bone Hunters bounced off her shoulders, while Tyrant hit his head on the ladder.

Tyrant: Ow, give me some warning, please. What are you doing down there?

Unknown: The ladder was moving up.

Tyrant: What? But… oh, never mind.

Suddenly, he and the remaining Bone Hunters flew down on the opposite side of the ladder, just barely touching the wall. When they were all down, the Unknown let go, and the ladder continued up.

Tyrant: Well, our trip up will be faster.

Everyone drew their weapons, and turned around to find a Tahnok Va staring at them.

Tahnok: Or maybe your trip is over.

Vakama: What do you mean?

Teridax: A shadow is rising. It’s growing in strength, and size.

Gelu: We already known about the Unknown. Or do you mean the Shadowed One.

Takanuva: Do you even know who it is?

The Unknown and her team had just fought through about two thousand Bohrok, and they were still coming. However, they had stopped going for melee combat, and were instead attacking from long range. Good thing the Bone Hunters were such skilled warriors.

They had barricaded themselves in a room filled with what Tyrant calls Vahki.

Unknown: Could you hurry up with that? We need those monsters active now.

Tyrant: Patience, these things aren’t your average computer, like your rocket. Besides, you can get out of here whenever you want.

Unknown: But I’d rather finish the Toa as quick as possible. And that won’t be possible without you lot.

Bone Hunter: They just took out two of us. Master, if your armor can withstand their fire, can you hold them off?

Unknown: I have no ranged weapons. And I can’t hold your puny Thornax launchers.

Tyrant: We’re going to have to fix that.

Unknown: After you’ve taken care of these things.

Unknown: Why are you backing away from it?!?

The Vahki began moving. It then made strange clicking noices, and all the other Vahki activated. They then began charging the Bohrok, and the Bohrok retreated.

After a few hours, running into resisting Bohrok, they had activated about half of the Vahki, who were now gathering the Rahkshi. The Bone Hunters had gone to check on the work, while Tyrant and the Unknown went in separate directions to search the place.

The Unknown was travelling down a hall in the 89th floor, when she came upon a dark, empty hall. As she stared down it, she felt a chill run down her spine, but also a feeling, like someone was calling to her. She slowly walked into the hall.

Teridax reached his hand behind a pillar, and melted into the shadow.

Vakama: Call the rest of the council.

The Unknown looked back and forth as she came upon each empty room. But then she came upon one with a dim, red glow. Curious, she walked in, unaware of the two eyes staring at her from the shadows.

Vakama: The Teridax that Mazeka brought to this universe just paid us a visit. Apparently, we have another threat upon us. But he says that it is one that we’ve faced before.

Gali: It could be the Dark Hunters. They are growing an army, as we speak.

Jaller: Teridax made it clear that it is not them. Even so, he doesn’t know who it is.

Nokama: So who is it?

Vakama: Takanuva… what was it Teridax said about obstructions?

Takanuva: “There is still an obstruction. The shadow is not yet gone.”

Gaaki: Well, he is wearing the Mask of Shadows.

Vakama: But he controls literal shadows. He means a figurative. But who?

Unknown: Who are you?

Male: I am the cold. I am the stench. I am the whispers in the caves. I am the shadows on the wall. I am the hand of Death.

A figure suddenly appeared like vapor in the door way behind her.

Shadow: I am your nightmare.

The Unknown stared at the figure.

Unknown: You’re the figure from my dreams!

Unknown: Well, it is a pleasure to finally meet you. But who are you?

Vakama: What do we know about this… threat?

There were some whispering, but no one answered.

Nokama: But we know for a fact that all the Makuta were killed by the other Teridax.

Vakama: Indeed. So, a shadow? A shadow of one of the Makuta? Of one of the most dangerous?

Jaller: And that is?

But Vakama had gone silent. Immediately, everyone knew who it was they were facing.

Suddenly, the shadow grew to match her height.

Shadow: My name is… Teridax.