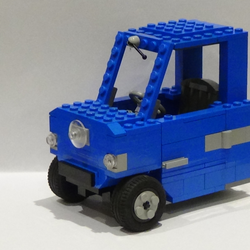 For over 50 years, the P50 has retained the title of the world's smallest car. Built on the Isle Of Man between 1962 and 1965, it measured just 54 inches Long and weighed just 59 Kilograms.

This replica of the Peel P50 goes hand in hand with similar Lego models already available such as the Mini Cooper and VW Campervan, which have already experienced great success.

This project includes realistic feature es that appeared on the original vehicle, such as;

The Peel P50 represents a very important and intriguing part of the motor industry. The Micro car era of the 1950's and 1960's contained some of the most eye catching and innovative designs in motoring history. The P50 took this tiny design to another level. These small cars came about due to Post-war material rationing and increased petrol prices. Replicating this vehicle in Lego would give children and teenagers the opportunity to learn more about the 'Bubble car' age and educate them about the little cars origins.