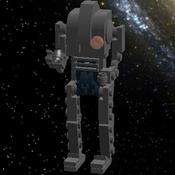 B1s were perhaps the most numerous and expendable soldiers in galactic history, and, unlike most organic soldiers, they were capable of action in hostile environments such as underwater or in space. They were designed, for the most part, to defeat their enemies through sheer numbers, not through their ability to think.

Early battles involving the droids required a central computer for the droids to "think" from, but this was mostly removed post-Battle of Naboo after an attack destroyed the mainframe stationed there, resulting in all the droids on the planet being deactivated.

"Useless things. A greater danger to us than to Jedi."
―General Grievous

Ok let`s go back to the model. It is build from 258 bricks and it took my about 4 hours to get it "perfect". The torso was the hardest part of the whole droid, and it think that the torso is the worst part of the whole thing. The arms and foots are moveable, so you can place it in diferent positions. I think that evry Star Wars fan would like to buy a lego battle droid that are bigger than the smal "clankers" in minifig scale. It is a bit bigger than the miniland version of B1 Batttle Droid. I hope that you will support it, don`t forget to comment so i can make a better version of this clanker. ;)

And the gun.
The gun could be better than that but i did not have any other ideas for the gun.


Thanks evryone for supporting my Project!