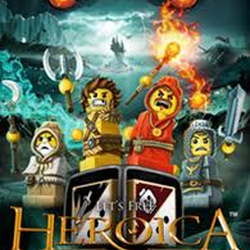 TedDz
2
In the Ennon Ruins Swamp the Ogre King has stolen the crown of the King! With a new invincibility potion that prevents damage when you lose in battle, your heroes will need it to battle against the giant rats, snakes and ogres that control the swamp that once held the mighty fortress of Ennon! Avoid the magic doors, fight the ogre army and reclaim the crown of the King!!!