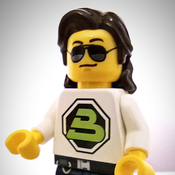 By Szaboba
88 comments
It is a fact that knights' tournaments were challenging for most of the participants in medieval times, but sometimes an average merrymaking right after the tournament can hold some unexpected events, which can blow our minds too, especially in Royal King's throne room.
Well, we jumped in the middle of a spontaneous duel between two noble knights from the 'Dragon Knight Order of Majisto'. Most of the people think they fight only for the glory of victory, however their true purpose and final goal is showing themselves in a real LEGO set.
Besides them, there is the Medieval Blacksmith, who just keenly fix their damaged weapons. He performed with the same attraction in the 'Royal King Talent Show' (you can see in my Ideas competition) to beat Majisto the magician master.
All the loyal lords are invited to this special occasion. Their feast is so abundant, so the guardians and the jester can take their meal plentifully too.
If you watch carefully, you can observe an uninvited intruder: a thief from the Wolfpack Renegades, who tries to steal the King's favourite treasures.
Last but not least, there is the host of the merrymaking, the totally amazing, very brave and absolutely grateful (and of course really, really humble ;-) ) His Majesty Royal King sitting on an enormous throne.
(I chose this topic, because a Royal King and the other brave knights are my favourite old-school characters from the late 90s).
If you want to join their company, please support this project and help to reach 10000 votes till the next tournament.
I hope you like it too, and want a set like this. :-D