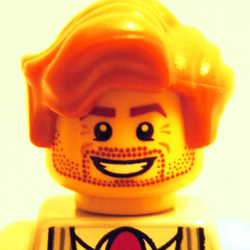 This is my original design of a Batmech for Batman. Inspiration for this mech did not come from any actual vehicles in the Batman comics, movies, t.v. shows or any other media. The design comes from actual bats.

The primary purpose of this mech is to disable an enemies vehicle. I have included a picture of the Batmech destroying the Joker's Ice cream truck. The Joker's ice cream truck first appeared in LEGO with the official set 788-1 - The Tumbler: Joker's Ice Cream Surprise. I don't know for sure who to settle on for the bad guy in this set or if another vehicle would be included.

This mech stands at 8 inches tall. The part count is unknown at this time since I have not dismantled the model yet. To get an idea of scale, the first picture below shows the Joker standing close by. Batman fits in the head of the mech. You can see Batman through the nose of the mech. You can also see a brick built bat symbol on the chest of the Batmech.