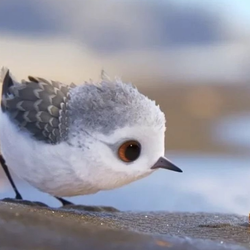 Today I am excited to show you my Lego Piper Short Film project. This is my first Lego Ideas project and I am really happy with it. I can't tell how much it would mean to me if I hit 100 or even 1000 supporters! If you like this project please support it and share it so it can reach a bigger audience and have a better chance at becoming a Lego set!

Piper is a Short Film made by Disney and Pixar that won the Academy Award for Best Short Film (Animated). The film is about a young sandpiper who is learning how to find and eat food. The film is truly magical and inspiring and I think would make a great Lego set. And that's why I built Piper out of Lego. I think that Lego should make more Disney and Pixar Lego sets and hope that this will be the start. I am very happy with my Lego creation and hope to reach 10,000 supporters, and even become a real Lego set!