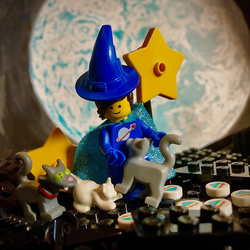 The Greebling Wizard
14
The “Space Junk Salvager” is an old shabby spaceship that would collect and loot from different places in the galaxy.  The character KEEP is an alien that was found on a run-down planet and was taken in by the crew.  This spaceship is supposed to look like it's made out of scraps and materials from other vehicles, so each time they find a different item that might benefit them such as an engine or weapon, it is added to the ship.

The front cockpit can open, the claw on top can be angled in various ways, and the top cannon can rotate 360 degrees.

The gray missile, the red chair, and the shopping cart are recent finds of the crew.