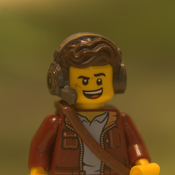 This set is based on the popular game Slime Rancher. It includes the ranch house itself (its fully furnished and can be opened completely, one upgradable corral for slimes, one upgradable chicken coop, one upgradable garden and a drone station. There is one minifigure for the protagonist of the game, Beatrix LeBeau two slimes, and one drone.

My idea for the upgradable corral/coop/garde is, that there are some module-type pieces that can be used to rebuild the corral/coop/garden in their upgraded form. the Corral for example can get higher walls, an air net, a plort collector and an auto-feeder.

i made the slimes slightly bigger than the 2x2 domes they should be, because im not too good with custom prints and i didnt want them to be featureless blobs like the plushie that sits on beatrixes bed. this set includes two rad slimes, but i think any slime would fit for the ranch.