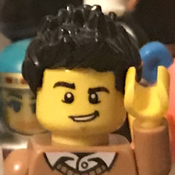 About the model
Golden Pavilion is the most famous monument in Japan.
Located at Kyoto City, Kinkaku-ji has a unique facade covered by golden leaves and this model tries to evoke this greatness by using gold chromed pieces.
This model is built with four parts:
- Garden and Lake;
- First Floor (Chamber of Dharma Waters);
- Second Floor (The Tower of Sound Waves);
- Third Floor (Cupola of Ultimate).
In total 2732 pieces were used (Width: 31 | Length: 26 | Height: 20 cm).
When was a child, we had a picture of Kinkaku-ji in our living room and we loved to see it and always inspired us to go there someday. After visiting it twice in Japan, I realized this monument needed to be immortalized in bricks form and I've tried to show most of the details of the building in a very small scale.
I hope you enjoy the result and it'd be great that this magnificent building can pose in a very special place at every living room as it had been before at mine as a LEGO model now.
Architectural Facts (Source: Wikipedia)
The Golden Pavilion (金閣, Kinkaku) is a three-storey building on the grounds of the Rokuon-ji temple complex.The top two stories of the pavilion are covered with pure gold leaf.The pavilion functions as a shariden (舎利殿), housing relics of the Buddha (Buddha's Ashes).
The first floor, called The Chamber of Dharma Waters (法水院, Hō-sui-in), is rendered in shinden-zukuri style, reminiscent of the residential style of the 11th century Heian imperial aristocracy. It is evocative of the Shinden palace style. It is designed as an open space with adjacent verandas and uses natural, unpainted wood and white plaster.This helps to emphasize the surrounding landscape. The walls and fenestration also affect the views from inside the pavilion. Most of the walls are made of shutters that can vary the amount of light and air into the pavilion and change the view by controlling the shutters' heights. The second floor, called The Tower of Sound Waves (潮音洞, Chō-on-dō ), is built in the style of warrior aristocrats, or buke-zukuri. On this floor, sliding wood doors and latticed windows create a feeling of impermanence. The second floor also contains a Buddha Hall and a shrine dedicated to the goddess of mercy, Kannon. The third floor is built in traditional Chinese chán (Jpn. zen) style, also known as zenshū-butsuden-zukuri. It is called the Cupola of the Ultimate (究竟頂, Kukkyō-chō). The zen typology depicts a more religious ambiance in the pavilion, as was popular during the Muromachi period.
The roof is in a thatched pyramid with shingles. The building is topped with a bronze hōō (phoenix) ornament. From the outside, viewers can see gold plating added to the upper stories of the pavilion. The gold leaf covering the upper stories hints at what is housed inside: the shrines. The outside is a reflection of the inside. The elements of nature, death, religion, are formed together to create this connection between the pavilion and outside intrusions