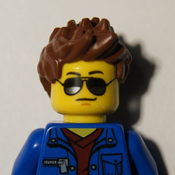 It is my first creation that I dared to show in public, encouraged by people who saw my previous designs. I always loved starships and machines so I decided to create one.

Its design is inspired by many real life machines and creatures as well as fictional creations and made in sci-fi style that appeals to me and maybe to you too. Model can stand on its own as well as being exposed on a stand.

Practically every bigger part of the hull is being mounted on joints (the cockpit, engines, wings, tail, legs and winglets) so it can be moved around in many various ways, which makes the model look very dynamic and also highly customizable.

I tried make it look as beautiful as possible by adding some details, but I also did not forget about playing factor (tested on real children) so it has many moving parts (like openable cabin doors and claws).

I would be happy to see what you think about it and I'm looking forward to receive some feedback.