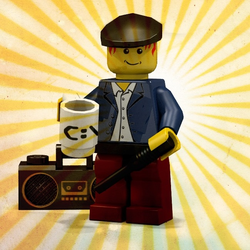 Trains have always been popular with Lego builders. My first train set was 182, which included a steam locomotive. The train came fully built and ready to play, if I remember correctly. Another model I always wanted but never got was 396 'Thatcher Perkins' - it was sold out when I made the wish. Than there's the elusive 10194 'Emerald Night' from 2009, so far the best steam engine ever released by Lego, but obviously long gone.

I'd like to make a contribution in the shape of my 4-4-0 Steam Locomotive, which is inspired by the beautiful and colorful engines of the American civil war era, and designed with good old 396 on my mind. The engine is equipped with a standard Lego train motor, and IR remote control. The four front wheels are held by a bogie plate, and so is the motor. This feature permits smooth riding across switch points and curves, including the new flexible rails. The tender is coupled closely to the engine, so the stoker can easily feed the fire with wood from the supply.

The 4-4-0 Steam Locomotive is fully compatible with Lego rolling stock of all current sets.