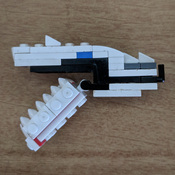 Scorpions are fearsome and awe-inspiring insects, and now you have a chance to dissect it and look at all its features. This scorpion can be split up to show a very basic anatomy of a scorpion, and can be put back together later for play. The parts of the scorpion are as follows:
Body: Nothing special here. It is simply where all the other parts attach, and it is also the body part that hosts the scorpions six eyes (2 above, 2 on each side).
Metasoma: This refers to a part of an insect consisting of multiple adjoining segments. In this case, it is the scorpions tail.
Aculeus: This is the stinger of the scorpion, its most dangerous and well-known weapon.
Chelicera: These are pincer like claws that make up the scorpion's mouth.
Pedipalps: These are the two arms of the scorpion, although the "pedipalp" is, technically, just the pincers, not the whole arm.
Legs: The scorpion has eight total legs, though they are all slightly different from one another.
(I have mentioned the parts in the order they are shown, in the photos.)

I made this as I have always admired insects, particularly scorpions, and I feel this will make a great toy, as well as be something educational. Please support this.